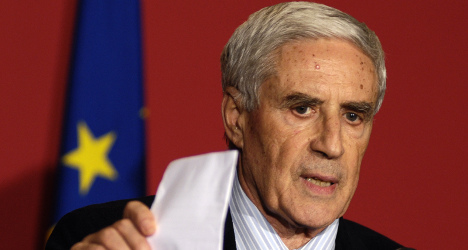 His political mentor once said that Marini "kills with a silencer". Born on April 9th, 1933 in San Pio delle Camere, a small village in the mountainous Abruzzo region, Marini lost his mother when he was just 11. He grew up in near-poverty with six brothers and a workman father.

"The best I could have hoped for was to go to school until I was 14," Marini said in one interview with left-wing weekly L'Espresso.

"But one day the literature teacher came to our house to tell my father I should go to high school. He had the intelligence to listen," he said.

A graduate in law, Marini did his military service in the Alpine military corps – an experience he has defined as "the most important" of his life.

Starting from the 1950s, he was a member of the Christian Democrat party – which dominated Italian politics for decades. He now represents the more Catholic wing of the Italian left.

"The first time I saw the sea was on a school trip with Catholic Action. And the first time I played football was at parish so how could I not be a Christian Democrat?" he once said.

Marini began his career in the trade unions at the age of 20.

He joined the CISL, the Catholic union confederation, where he eventually became secretary general in 1985.

At this time, his mentor Carlo Donat-Cattin, one of the founders of the CISL who served as a government minister in the 1960s and 1970s, said that Marini was a skilled political mover and shaker who "killed with a silencer".

Marini later said he had never understood whether the remark was meant as "a compliment or an insult". He has also been called "a cold-blooded animal" in the Italian press because of his extreme calm under stress.

His political career began relatively late, in 1991, when he became the labour minister in the last government of Giulio Andreotti – the most famous and controversial leader of the Christian Democrats.

In the 1990s, he led the Italian Popular Party. He was elected to the European Parliament in 1999, before joining the centre-left "La Margherita" party in 2001.

He was named speaker of the Senate in 2001 and in 2008, when Romano Prodi's centre-left government fell, he was called on by President Giorgio Napolitano to try and find a consensus between parties on urgent reforms for the country.

He failed to do so and Napolitano had to call early elections, which were won by Silvio Berlusconi.

Marini took part in the creation in 2007 of the Democratic Party, which is now the main centre-left grouping.

He has been married since 1961 with Luisa and the couple have a son.

Marini has said he loves to take a car up from Rome to his native village on weekends, which now has just 450 inhabitants.

"I arrive at around ten in the evening when there are just a few lights on," he said. "I walk for hours, hearing the sound of my footsteps. I re-discover the sights and sounds of my childhood".