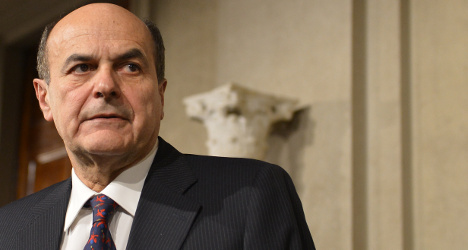 Bersani, who has come under increasing pressure from his own party in recent weeks, said he would step down once a new president for the country had been elected.

A rebellion in the leftist ranks earlier Friday further undermined his credibility as his candidate for president, former premier Romano Prodi, failed to win enough votes in a secret parliamentary ballot.

Until the vote, the former European Commission chief, who has twice inflicted election defeats on right-wing leader Silvio Berlusconi, had been considered the front-runner for the job, backed officially by the centre-left.

But the right refused point-blank to support him – and then more than 100 leftist voters broke ranks, leaving him with just 395 votes, well short of the 504 needed to win.

The vote will now go to a fifth round at 0800 GMT Saturday.

Political in-fighting that has marked the process so far has dimmed hopes that the political deadlock will be broken any time soon in the recession-hit country.

Voting takes place in secret, meaning deputies are not obliged to toe a party line.

Earlier Friday, hundreds of right-wing protesters holding up placards demonstrated in front of the lower house of parliament, chanting "Prodi will not be my president!"

In comments to the ANSA news agency, Bersani conceded that his party alone could not get a candidate voted in. They would resume talks with other parties on Saturday, he said.

Bersani had pinned his hopes on two-time premier Prodi, 73, a sharp about-turn after an earlier bid to work with the right.

The move, which infuriated his rival Berlusconi, was an attempt to limit the damage caused by the dramatic failure of the Democratic Party (PD) to get their first favoured candidate – former Senator Franco Marini – elected.

But some leftist lawmakers rebelled against the choice and for the centre-right the choice of Prodi was unacceptable.

Earlier on Friday, the PD had denied its leader would resign, but experts had warned that the mutiny over the vote risked splitting the party apart – and that Prodi's candidacy had now been blown.

The anti-establishment Five Star Movement, which had also rejected Prodi, said it would continue to support its candidate Stefano Rodota, a human rights advocate and respected academic.

With Prodi defeated, it is not clear who the front-runner is. Party members from across the political sphere will now have to spend the hours before Saturday's vote looking for a new candidate.

Whoever wins will face the challenging task of attempting to unblock the political impasse in the eurozone's third largest economy caused by February's inconclusive general election.

Even before Prodi's defeat, Bersani had been facing growing calls for his resignation after he threw away a large lead over the centre-right at the general election.

Matteo Renzi, the mayor of Florence and a rising star in the PD, challenged Bersani for the leadership in December and lost. But many within the party now wonder whether he might have fared better in the elections.

In February's election, Bersani failed to get enough votes for an overall parliamentary majority. Berlusconi came a close second and the Five Star Movement led by mercurial comedian Beppe Grillo was not far behind.

The three have failed to agree on much over the past two months despite increasingly desperate pleas from big business, trade unions and ordinary Italians.

Observers had been hoping that a cross-party agreement on a new president could yield a broader deal on a new government. But even that has so far proved beyond their reach.

The new president will have more powers than outgoing President Giorgio Napolitano: as he was in the final months of his mandate, he was constitutionally prevented from dissolving parliament and calling fresh elections.