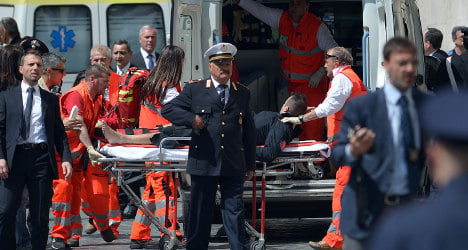 An Italian policeman is carried away by paramedics. Photo: Gabriel Bouys/AFP

Two policemen were wounded in a shooting outside government offices in Rome on Sunday, just as the country's new coalition cabinet was being sworn in.

The incident occurred about a kilometre away from the presidential palace where Prime Minister Enrico Letta and his ministers took the oath of office.

Italian news agency ANSA said two policemen were wounded, one in a critical condition, adding that the shooter was also injured, and has been arrested.

The swearing in of the government should bring fresh hope to a country mired in recession after two months of bitter post-election deadlock watched closely by European partners.

Letta was the first to take the oath of office at a ceremony led by President Giorgio Napolitano, who appointed him after the centre-left won February elections but without the majority needed to govern.

The 46-year-old, one of the European Union's youngest prime ministers, is expected to unveil his programme in a parliamentary session on Monday, before the government is put to a confidence vote in parliament on Tuesday.

The deadlock had thwarted efforts to end the worst recession in Italy in 20 years, and Letta has said he wants to move quickly to tackle unemployment – currently 11.6 percent — and boost growth.

The leftist leader also wants to move away from the austerity imposed by his technocrat predecessor Mario Monti to protect Italy from the eurozone debt crisis – a promise which will be followed closely by investors concerned about Italy's two trillion euro debt mountain.

Italy's debt will rise to 130.4 percent of gross domestic product this year, according to an official forecast.

Unveiling his new cabinet Saturday, Letta said he was proud to have included younger ministers – the average age is 53 – and more women to help renew a tired political scene and rebuild confidence in the discredited political class.

Letta is "the doctor for a sick Italy," Eugenio Scalfari said in La Repubblica, adding that the premier had kept his promise for a cabinet of expertise, freshness, non divisive names".

Commentators said the exclusion of any big political names was a bid to avoid infighting within the coalition and acknowledge a growing call from the electorate for change.

"A generation has left the scene. Those who occupied centre stage in the two biggest parties and the previous governments have been handed the bill," said commentator Mario Calabresi in La Stampa.

Stefano Folli, political expert for Il Sole 24 Ore, noted "many women, many new faces, and the exclusion of almost all of those who represented the historical dispute" between left and right.

While the appointment appeared to be aimed at appeasing the right, it angered critics of the scandal-tainted billionaire tycoon, who they claim will have a grasp on the reins of power.

Berlusconi – currently on trial for paying for sex with a 17-year-old prostitute – has seen his popularity ratings rise, and fought to have his right-hand man in pole position. Alfano will also become interior minister.

Fabrizio Saccomanni, a director at Italy's central bank, is finance and economy minister, while Emma Bonino, a former European Commissioner, is foreign minister.

"It's a return to political reality. Everyone had to give way on something. There was no turning back to how things were before," said La Stampa political columnist Massimo Franco.

The only alternative to a deal would have been fresh elections, which neither side would necessarily have won with the majority needed to govern – although recent opinion polls show that Berlusconi might have emerged victorious.

The new government is bound to bring some relief to anxious international observers, after the warning from ratings agency Moody's Friday of an "elevated risk" that the political stalemate would harm investor confidence.

Letta has promised to act fast on key reforms – such as tackling the complicated electoral law which created the deadlock in the first place – but the diverse make-up of the government and internal divisions within the PD may make his job more difficult.

"The Letta government is a time-bomb for a (centre-left) party in dissolution, with its members in revolt and which in parliament will be forced to co-manage the personal problems of its ex-enemy" Berlusconi, said Antonio Padellaro in the left-wing Il Fatto Quotidiano.

Political analysts have warned that the coalition team may have a limited life of one-to-two years before bickering parties or rebel politicians bring it down and fresh elections are held.