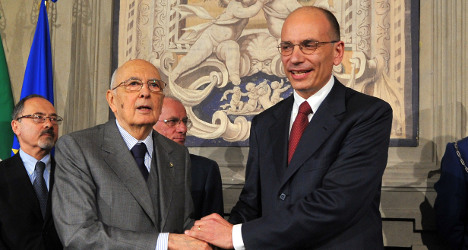 The recession-hit country, which had been effectively rudderless since an inconclusive election in February, faces pressure to act fast to tackle social, economic and institutional ills.

"The contrast between the shock and uncertainty stemming from February's inconclusive election and the extremely favourable sentiment towards Italian paper right now is striking," said Nicholas Spiro from Spiro Strategy, a sovereign credit risk consultancy.

Letta, a 46-year-old moderate from the centre-left Democratic Party, is expected to address parliament at 13:00 GMT.

He has said he wants to deal quickly with the social fallout of the longest economic slump in 20 years by tackling a jobless rate of 11.6 percent and moving away from the austerity imposed by his predecessor Mario Monti.

The European policy on austerity, he said last week, "is no longer enough".

Political observers will also be looking for key measures aimed at pulling the eurozone's third-largest economy out of a recession which has driven thousands of businesses to bankruptcy.

Official figures on Monday showed that business confidence dropped sharply this month, falling to 74.6 points from 78.5 points in March on the national statistics agency's index.

"While post-crisis market sentiment towards Italy has never been better, economic conditions have never been worse," Spiro said.

Letta has promised to renew confidence in the country's scandal-hit and fractious political class but will be pushed hard to please all players.

The party bickering which followed the centre-left's failure to win a majority fuelled the growing unease captured in the anti-establishment Five Star Movement's spectacular rise to win one-fourth of the February vote.

Epitomizing the climate of tension, an unemployed man suffering from depression after failing to find work shot two policemen Sunday outside government headquarters just as the new cabinet was being sworn in a kilometre away.

Italy's newspapers on Monday said the attack had raised the spectre of the political violence that scarred the country during the 1970s.

"Six gun shots and Rome shakes from the idea of a new terrorism," said Il Fatto Quotidiano, while Il Corriere della Sera spoke of "those ghosts that follow us still".

The markets reacted favourably to the new government, with Milan stocks up 1.37 percent in late morning.

Ratings agency Moody's had warned on Friday of an "elevated risk" that a continued political stalemate would harm investor confidence.

Economy Minister Fabrizio Saccomanni, formerly the director general of the Bank of Italy, said on Sunday he would launch a pact with banks, businesses and consumers to boost growth and tackle a two-trillion-euro ($2.6-trillion) debt.

Italy's debt will rise to 130.4 percent of gross domestic product this year, while the economy will shrink 1.3 percent, according to official forecasts.

Letta's success will also rely on ensuring the continued support of the political parties – and he faces the first challenge on Monday from billionaire media magnate Silvio Berlusconi's centre-right People of Freedom party (PDL).

Berlusconi made the abolition and refund of a controversial housing tax imposed by Monti a key concession in exchange for his party's support – a move which would set the budget back some eight billion euros.

Renato Brunetta, PDL leader in the lower house, told Il Messaggero daily on Sunday that if the tax deal is not included in Letta's programme, the party will withdraw its backing.

Letta will also have to work to keep his own party from imploding, after a rebellion last week badly fractured the party.

The government will go to a confidence vote in both houses of parliament either Monday or Tuesday.

Analysts say the coalition is likely to last long enough to push through key reforms – including a revision of the complex electoral law which created the deadlock – but may be brought down by sparring parties within a year or two.

Observers said the resurgent Berlusconi – who installed his protégé Angelino Alfano as the government's number two – may pull support once he believes he could win a fresh poll.