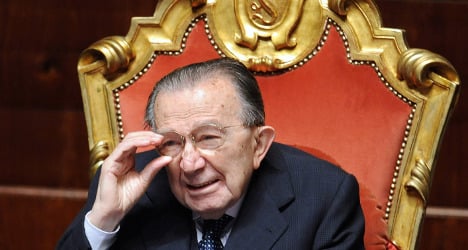 Andreotti, a key figure in the once-dominant Christian Democratic party, died at his home in central Rome. He had suffered ill health in recent years and was hospitalized in August last year with heart trouble.

A private funeral will be held on Tuesday in Andreotti's local church for the staunchly pro-Catholic politician, who had close ties with the Vatican and was accused of shadowy links to the mafia and the Holy See.

Andreotti was "a leading protagonist for over 60 years of public life," said Prime Minister Enrico Letta.

Flags will be flown at half-mast at sporting events across Italy in honour of Andreotti, who helped bring the Olympics to Rome in 1960.

Rome's Corso Vittorio Emanuele, which leads from the historic centre to the Vatican, was closed off to the public by police so that mourners visiting Andreotti's home could pay their respects.

"He was the engineer of this country's reconstruction" after World War II, Paolo Cirino Pomicino, a former minister under Andreotti, said on news channel Sky TG 24.

A controversial figure associated with a period of political violence which rocked Italy in the 1970s and 1980s, critics accused Andreotti of Machiavellian behaviour and nicknamed him "The Untouchable".

Anti-mafia prosecutor Antonio Ingroia said that while "Andreotti, with his many shadows, is dead, Andreottism is certainly not," in a reference to ties in Italy between power and organised crime.

Andreotti was blamed for refusing to negotiate for his political rival Aldo Moro's freedom, when the latter was kidnapped – and later murdered – by the Red Brigades in 1978.

Philip Willan, author of "Puppetmasters: The Political Use of Terrorism in Italy", said the former premier was "a very good illustration of the strange bedfellows created by the Cold War. Someone like him could be a great friend of the pope but also in contact with mafiosi, allegedly."

He was sentenced to 24 years in prison for ordering the murder of an investigative journalist in 1979 after a high-profile trial, but an appeals court cleared him in 2003 and he served no time in prison.

The accusations lingered, however, particularly after testimony provided by mafia turncoats who alleged that he had met with Cosa Nostra dons.

The journalist in question, Mino Pecorelli, had been publishing articles alleging Andreotti had ties to the Mafia.

"I know when I die I will not have to answer for Pecorelli or the mafia. Other things yes. But on those two things my papers are in order," Andreotti once said.

Riccardo Barenghi, a former editor of leftist daily Il Manifesto, said: "He takes many secrets to the grave with him."

With his stooped figure and bespectacled, hangdog expression, Andreotti was the butt of many jokes and was popularly dubbed "The Hunchback".

Ex-comedian Beppe Grillo, who founded the anti-establishment Five Star movement, once said: "The day that Giulio dies, we'll open up the black box in his hump."

The news of his death sparked irreverent responses on Twitter, with one tweeter saying: "He'll resurrect in three days."

Political commentators also spoke Monday of the vast collection of documents and private letters Andreotti left behind him in a vault in Rome.

"The most feared and sought after archive" in Italy, according to Il Fatto Quotidiano daily, it holds 3,500 envelopes of tightly-restricted information, some of which has never been documented.

Andreotti "was a very skilful operator and unscrupulous too. He was one of these people who knew an enormous amount but was never going to talk. It would have been opening a lid on a pandora's box," the author Willan said.

Andreotti lived in a luxurious apartment building facing the Vatican and boasted intimate relations with a succession of popes.

According to La Stampa daily, he met his first pontiff when as a child he snuck into a group of pilgrims meeting Pius XI.

He became a regular presence within the tiny city state and was said by some to wield great influence.

As editor of the Concretezza magazine in 1958, on the eve of the papal conclave to elect a successor to Piu XII he published an edition featuring the Patriarch of Venice, Angelo Roncalli, on the cover.