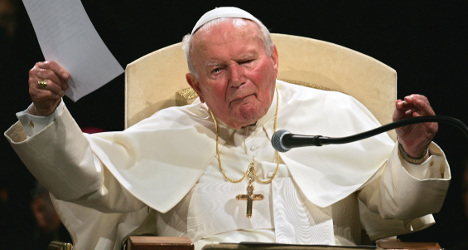 The 55-year-old Slovak street performer was detained, fined and stripped of his cassock on Friday after police received an anonymous complaint.

“The problem was that he looked a lot like Karol Wojtyla. He was detained for usurpation of title – which is a misdemeanour,” a police spokeswoman told AFP.

A nearby vendor selling miniature Colosseum souvenirs on a spot overlooking the Roman Forum said he saw the man being arrested. “He was right here, near me. He was taken away by two officers in civilian clothes who were pretending to be tourists,” he said.

The area around the Colosseum is a popular spot for street performers, notably men impersonating Roman centurions, hoping to cash in on the hordes of tourists that visit the famous monument every day. But up until now none have been as controversial as the Pope-impersonator.

As another officer put it: "If he had been dressed like Tutankhamun nothing would have happened."