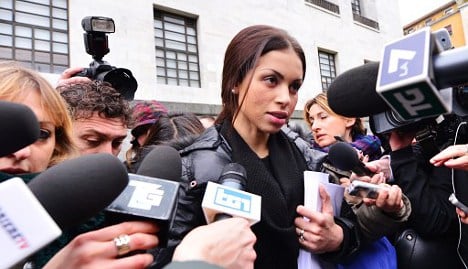 Karima El-Mahroug speaks to journalists as part of a protest in front of Milan's courthouse on April 4th 2013. Photo: Giuseppe Cacace AFP

The woman, better known by her nickname Ruby the Heart Stealer, said she saw up to 20 girls stripping for the prime minister but had never seen physical "contact" between the host and the young women.

El-Mahroug said Berlusconi would call her up to invite her and she would sometimes stay the night. She has said in the past that she never had sex with the host.

The trial at which El-Mahroug was testifying is of Lele Mora, a former showbusiness agent, Emilio Fede, a network anchor for Berlusconi's television empire, and Nicole Minetti, a showgirl and politician.

The three are accused of supplying girls for the allegedly raunchy "bunga bunga" parties in 2010 but Berlusconi says they were "normal dinner parties" followed by "burlesque contests".

El-Mahroug said she first met Fede at a beauty contest in Sicily when she was 16 and he had asked her for her phone number. She said she had also worked for Mora as an "image girl" at parties.

El-Mahroug said Minetti was a regular attendee at the parties and she had once seen her perform a strip show for Berlusconi dressed as a nun. Berlusconi's separate trial for allegedly having sex with an underage 17-year-old prostitute, El-Mahroug, and for abuse of office is due to conclude next month after more than two years.

El-Mahroug had been due to testify at that trial but initially said she could not attend as she was in Mexico and was subsequently struck off the witness list by both the prosecution and defence.

Berlusconi is accused of pressuring police to have El-Mahroug released from custody when she was arrested for petty theft so she would not reveal their liaison. His defence says he thought she was the niece of then Egyptian president Hosni Mubarak and only wanted to avoid a diplomatic incident.

El-Mahroug on Friday said she had made up a story about her life the first time she met with Berlusconi at his home in February 2010 and told him that she was "a relative of Mubarak".

Prosecutors have requested that Berlusconi serve six years in prison and be banned from holding any public office for life in that trial, also in Milan, in which the verdict is expected on June 24.

The former prime minister is a senator and as leader of the People of Freedom party is a key player in a grand coalition government with the centre left Democratic Party unveiled last month.

Berlusconi denies all charges and his supporters say the trial as well as several other legal cases against him are an attempt by biased left-wing prosecutors to eliminate him politically.