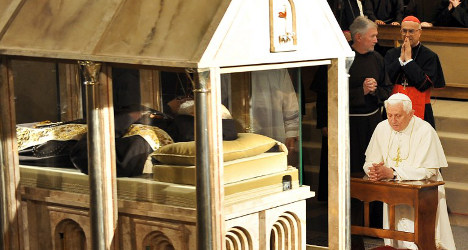 Pope Benedict XVI (R) prays at the crypt of St. Mary of Grace dedicated to Padre Pio's body as the corpse of the friar lies in a coffin. Photo: Andreas Solaro/AFP

The bearded friar, who died in 1968, is the object of a cult that has concerned the upper echelons of the Catholic Church and his claims that he suffered the same wounds as Jesus Christ are treated sceptically by the scientific community.

The body, which is covered with a layer of silicone, will be displayed in a church designed by award-winning architect Renzo Piano at the San Giovanni Rotondo sanctuary in the Puglia region where the saint lived his final years.

Padre Pio's body previously went on temporary display in 2008 and 2009 and the Capuchin friars in charge of the sanctuary said they were inundated with requests for a permanent exhibit.

Born near Naples in 1887, Padre Pio is Italy's most venerated saint after St Francis of Assisi.

He was canonized by late pope John Paul II in 2002.

The permanent display is open from June 1st.

TOURISM
Trulli to treehouses: Why Italy’s tourists can’t get enough of ‘back to basics’ travel
Url copied to clipboard!