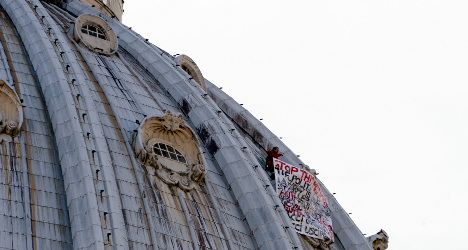 The man, Marcello Di Finizio, has climbed onto the cupola before in July and in October of last year to protest against the economic crisis and austerity measures in Europe.

"Stop the massacre. The political show is an ongoing horror," read a large white banner hung from the basilica, adding: "Help us, Pope Francis".

De Finizio is from Trieste in northeast Italy and owns a beach resort in the region.

The Argentine pope, who was elected in March, has been a powerful critic of money-minded ideologies and has called on government to protect workers and pay more attention to the dispossessed.