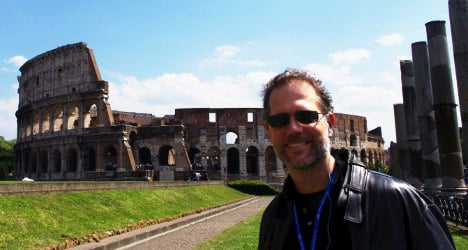 How did you end up in Rome?

Before I moved to Rome, I worked as a dentist in Florida. In 2010, I sold my practice and took a sabbatical to travel through Italy for three months.

In Rome, I found a group called Expats Living in Rome that organized aperitivi and Italian lessons. Which is how, on my second day in the city, I came to meet the Italian teacher who later became my wife. I quickly cancelled the rest of my itinerary and ended up staying in Rome, where I now work as an English teacher.

Was it easy to find work in Rome?

English teaching is probably one of the few jobs that’s extremely easy to come by if you’re a native speaker.

It’s fine to do a job search online, but when applying for a position, it’s best to deliver your CV in person. Italians prefer to do business face to face.

In my case, I compiled a list of schools that I thought I’d like to work with, then spent two days hiking around the city handing out CVs. The following week, I received two phone calls with job offers.

With the financial crisis deepening in Italy, many more Italians now see English as a potential step towards more opportunities, either within Italy or abroad. This has led to a proliferation of private language schools here in Rome and throughout the country, and consequently a greater need for native speakers.

Although I enrolled in a TEFL program when I arrived in Rome, it’s worth noting that there are English teachers in the city who have no other qualifications other than being able to speak it.

Do you miss being a dentist?

No, I don’t miss it, but other people seem to think that I should! Here in Italy, dentistry is considered a very good profession and it’s one of the highest paying jobs. But I prefer teaching—it suits me at this point in my life.

Was it easy to integrate?

Well, Rome is a big, international city, so you don’t have to integrate. But I think you’re missing out on the true value of living in another country if you completely sequester yourself inside the expat bubble.

In my experience, I’ve found Italians to be very welcoming, so it’s easy to make acquaintances.

However, they’re also very tight with their inner circle of family and life-long friends, so making deep, lasting friendships takes time. In the U.S., if you chat with a stranger at a bar, you’re practically best friends after the second beer. Things take a little longer in Italy – which is fine, and probably even better, in fact.

Was it easy finding somewhere to live?

Finding an apartment in Rome isn’t difficult – but it’s time-consuming. Your best bet is to look through the online listings and just start making phone calls. You can hire an agent to find one for you, but that will cost an extra month’s rent.

When it comes to the cost of renting, Rome is like any big city: expensive, and what you pay depends on size, condition and location.

What differences do you notice in the working culture?

In an office environment, Italians have a more defined hierarchy. A boss in Italy wouldn’t typically interact informally with people under him or her beyond a polite “Buongiorno”. And sometimes they don’t even go that far.

In the U.S, it’s quite common for employees of all levels to socialize with each other, even outside of work. Not so in Italy.

On the other hand, people in the U.S. certainly work harder and for longer hours. I’m not saying that U.S. workers are more productive, but in America there’s an understood directive to always give the illusion at least of looking busy – in case somebody’s watching. I think people in the US define themselves by their job more so than in Italy.

What was the most difficult part of moving to Italy?

Without question, deciphering the bureaucracy and then finding the endurance to engage in combat with it. Persistence is your best weapon.

The process of obtaining a ‘Permesso di Soggiorno’ (a residency permit), for example, is a bureaucratic nightmare that can take up to seven to eight months and consume every last bit of your patience.

How important is it for expats to learn Italian?

I do speak Italian, although not perfectly and certainly with a noticeable accent. For me, it was important to learn the language—it goes back to the question of integration. If you don’t speak Italian, then you’ve effectively limited your social group to expats only.

While a circle of expat friends is important in the beginning, it can also be a trap that prevents you from really appreciating the culture that you’ve come to experience.

Finally, what advice can you offer other expats looking for a job in Italy?

The job market is extremely tight right now, but there are always opportunities for someone who’s flexible and resourceful. Unless you’re going to either teach English or be an au pair, you must speak decent Italian. You don’t have to be perfectly fluent, but certainly functional.

For this reason, have your CV ready in both English and Italian. Use your full title, if you have one. A person with a bachelor’s degree has the title“Dottore” here. As well as the more usual skills (languages, writing, etc.), try to bring to the table at least one very specific skill – such as something related to technology.

And, in Italy, appearances matter – so pay attention to your wardrobe and grooming.