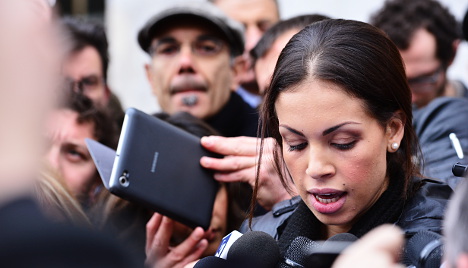 "Ruby the Heart Stealer" outside court in Milan. Giuseppe Cacace/AFP

"I am sorry I talked rubbish when I spoke to prosecutors," Karima El-Mahroug, a dancer nicknamed "Ruby the Heart Stealer", said at a separate trial against three friends of Berlusconi's accused of pimping for him. "The majority of the things I said were not true," she said.

The Moroccan-born 21-year-old, who is alleged to have had sex for money with the then-prime minister several times in 2010 when she was 17, had said that Berlusconi and his accountant gave her 187,000 euros ($243,000) in cash. But on Friday she said she had "made up" the sum just to show off.

Berlusconi is accused of having sex with an underage prostitute, El-Mahroug, and of abuse of office when he called up a police station in May 2010 to have El-Mahroug released from custody when she was arrested for petty theft.

A verdict in that trial, which began two years ago, is expected in June. The main prosecutor at the trial, Ilda Boccassini, on Thursday received a death threat that referred to the trial and an envelope with two bullets in it. Boccassini earlier this month requested a six-year prison sentence against the 76-year-old Berlusconi, as well as a lifetime ban from politics. Also on Thursday a judge who upheld Berlusconi's conviction for tax fraud related to his television empire said that the media magnate had continued managing the fraudulent business scheme even when he was prime minister.

A verdict on Berlusconi's final appeal in the fraud case is expected later this year.

The sentence, which has been frozen pending the appeal, is a year in prison although even if definitively convicted, he may not serve time because sentencing guidelines for over-70s are very lenient in Italy.