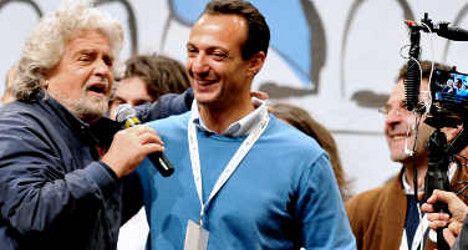 Meanwhile, The Local ventured to the Piazza del Popolo, where the former comedian Beppe Grillo, leader of the insurgent Five Star Movement (M5S), addressed supporters, to get some reaction to Berlusconi’s slur that “the Grillini (meaning 'the little crickets' and referring to members of Grillo’s party) are puppets led via the internet by a rambling comic.”

The elections, which are taking place in towns and cities across Italy on Sunday and Monday, are seen as being an instrumental test for the parties behind Prime Minister Enrico Letta’s coalition government.

Indeed, the internet has played a crucial role in promoting M5S’s popularity. Grillo, 64, has spread his message, which rallies against austerity, corruption and inept politicians, through his blog, www.beppegrillo.it. This, along with a growing dissatisfaction for the ruling class, propelled the party to third place in both houses of parliament at the general election in February. Grillo formed M5S, often accused of being populist, in 2009.

But far from being puppets, the M5S is “the last solution” for Italian politics, according to Francesco, an engineer who was born in Naples but lives in Rome.

“There are no jobs for the young and education is being destroyed,” he said.

Francesco likened M5S to the 19th century Risorgimento (Resurgence), the movement for the liberation and political unification of Italy.

Danilo Barbuto, an M5S candidate for one of Rome’s districts, said it’s not so much a case of the party attempting to wipe out rivals, but of changing people’s mentality.

“The political system for the past 20 or 30 years hasn’t worked. We must completely change our way of thinking,” he said.

Barbuto added that the party’s message of Italian politics being corrupt and elitist has struck a chord, especially with the younger population.

When asked why he thought the scandal-hit Berlusconi was still popular with voters, he said: “The problem isn’t so much Berlusconi, it’s that our society has one main mode of communication: television, which tends to project a distorted image of things. Whereas the younger voters we’re attracting have better access to information through other channels.”

Barbuto admits that changing Italy’s political landscape won’t be an easy battle, but urged people to stick together. “Leaving Italy is not the answer,” he said in response to the swathes of unemployed young people seeking work overseas. “In Italy we have the resources to change.”

Renato, a scientist who returned to Rome after working in the United States for several years, is less convinced about the M5S.

“At this point, we can’t see where they’re going,” he said.

Renato supports the Democratic Party as he shares the party’s vision. The party’s Ignazio Marino, a former surgeon, will vie for control of Rome this weekend against Alemmano for the People of Freedom Party and  Marcello De Vito for the M5S.