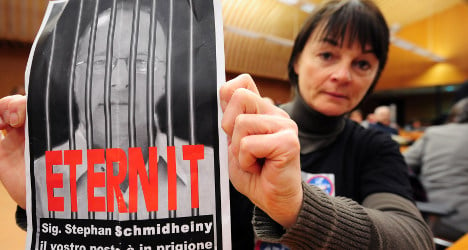 The tycoon was also ordered to pay tens of millions of euros in compensation to the town worst affected by the absestos, Casale Monferrato, to the regional administration as well as to survivors and families of victims.

Campaigners immediately hailed the verdict as an important precedent for other legal action over asbestos-related deaths. The tycoon is the former owner of an Italian plant making Eternit construction material using asbestos and was sued by former employees.

Schmidheiny, who has been referred to by Forbes magazine as the "Bill Gates of Switzerland" for his philanthropy, had been convicted last year over the Eternit case and sentenced to 16 years in prison.

The appeals court said he was responsible for "a permanent health and environment catastrophe" and had violated work safety rules at his facilities.

The case against Belgian baron Jean-Louis Marie Ghislain de Cartier de Marchienne, a major Eternit shareholder who had also been convicted, was dropped because he died last month.

The town of Casale Monferrato, one of the worst hit by asbestos-related cases, was awarded 30.9 million euros in damages while the Piedmont region, where the largest Eternit factory was located, was awarded 20 million euros.

Eternit went bankrupt six years before asbestos was banned in Italy in 1992. The first trial began in 2009 after a five-year investigation and is the biggest of its kind against a multinational for asbestos-related deaths.

Asbestos, which was banned in Europe in 2005, but is still widely used in the developing world, had been used mainly as building insulation for its sound absorption and resistance to fire, heat and electrical damage.

The inhalation of asbestos fibres can cause lung inflammation and cancer, and symptoms can take up to 20 years to manifest after exposure.