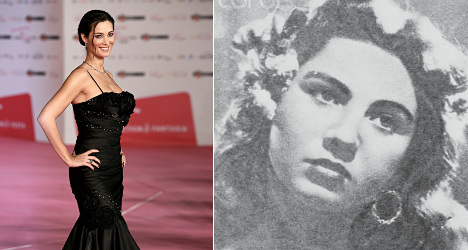 Actress Manuela Arcuri (L) who will be depicting a young Pupetta Maresca (R) in the TV drama. Photos: myalexis/Joyson Prabhu (Wikicommons)
Entitled 'Pupetta – the Courage and the Passion', the controversial four-part TV drama centres on the early life of Assunta Maresca, known familiarly as “La Puppetta” (little doll). The series is due to start on Channel 5 tonight.
She will be played by the 36-year-old Italian actress and model Manuela Arcuri.
Maresca, now aged 77, is the daughter of notorious mafia boss Vincenzo Maresca. She made international headlines in the 1950s when she killed Antonio Esposito – a mafia boss who had murdered her husband. Her sentence of 18 years’ imprisonment was later reduced to 13 years and four months by the Court of Appeal.
During her trial, Maresca became an international celebrity and was referred to by one newspaper as the “Diva of crime”.
According to media reports, Maresca – who was six months’ pregnant during the trial – shouted: "I would do it again!" after being found guilty. The courtroom in Naples resounded with cheers. She would later give birth to her child in prison.
However, anti-mafia campaigners and the Italian media have been quick to criticize the “heroic” vision of Maresca presented in the television series.
Italian daily La Repubblica describes it as the “(incomplete) history of one of the first ladies who came to symbolize the power of the Camorra”. The newspaper quotes one unnamed Neapolitan anti-mafia organization as saying: “Don’t call these people ‘heroines’.”
Prominent anti-mafia campaigners Paolo Siani, Tonino Palmese and Lorenzo Clemente – all of whom have close connections to victims of the mafia – told the paper that glorifying such people is effectively to kill their innocent victims a second time.
“If they [the makers of the program) really wanted to celebrate a female figure, we have a few suggestions,” said Palmese. “I’m thinking of Matilde Sorrentino and Teresa Buonocuore –  honest, simple and respectful women who were savagely killed. These are real stories from yesterday, not the 1950s."
“But it’s not Signora Maresca who’s  to blame for this series – it’s the producers who prefer money and commercial success to ethical responsibility," Palmese added.