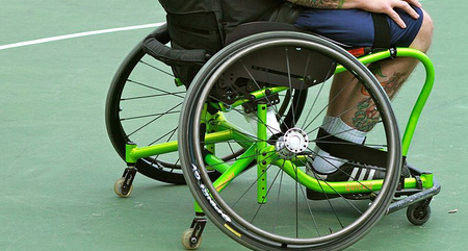 A campaign is under way in Italy to create sex services for disabled. File photo: y.accesslab/flickr

Giorgio is 27 and suffers from Williams syndrome, a rare mental impairment disorder.

His mother, Patrizia, said in a video posted on Italian daily Il Fatto Quotidiano that “nobody thinks that a disabled person needs sex. But if we have educators, physiotherapists and speech therapists, disabled people should also be able to have a trained person to help them sexually.”

Patrizia said she considered finding a prostitute for her son. “I know it sounds crazy…but you have to solve it. I was moved by the thought of Giorgio having contact with someone of the opposite sex, but at the same time the idea of paying someone for it scared me.”

The taboo subject is the focus of a campaign in Italy by Max Ulivieri, a disabled web designer, to regulate the profession of a sexual assistant in Italy.

It was also a matter of heated debate in France earlier this year, after the National Consultative Ethics Committee rejected the idea, saying it saw too great a risk of abuse.

Still, French MP Jérôme Guedj is attempting to push ahead with the creation of the country’s first sexual assistance service for severely disabled people in his region of Essonne Gernal. He rejected the ethics committee’s suggestions that the services will constitute a form of prostitution and told French newspapers in March that it would be free of charge and run by charities for the disabled using voluntary workers.

The issue is less of a stigma in Germany, where prostitutes pay tax and sex workers are given special training to serve the disabled. In Switzerland, the job of sexual assistant has had a legal status for more than eight years. The role is also legal in the Netherlands, where disabled people can get money from the government to pay for sexual relations.

Patrizia backs the campaign to legalize the role of sexual assistant for disabled people in Italy. She said: “In Italy, we still have the notion that a disabled person is not a person. We do not have respect to think that, before their disability, there is a person who’s needs must be respected.”