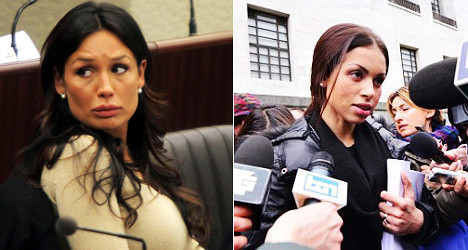 She made her surprise declaration of love for Berlusconi as the trial in which he is accused of paying for sex with an alleged underage prostitute, Karima El-Mahroug, known as “Ruby the heart stealer”, was reaching its final stages.

Nicole Minetti, a former Lombardy regional councillor and aspiring showgirl who also worked as Berlusconi’s dental hygienist is accused of supplying women to Berlusconi at his residence in Milan for the so-called "bunga bunga" sex parties. Prosecutors have also accused her of “performing sexual acts for payment”.

Minetti is on trial alongside Emilio Fede and Lele Mora, two elderly colleagues of Berlusconi who are also accused of supplying women to the ex-prime minister. Prosecutors allege that Fede brought El-Mahroug to the parties. All deny the charges.

Speaking in court on Friday morning, Minetti said she had never “introduced” women to Berlusconi at his residence nor organized any of the so-called "bunga bunga" parties.

She had first met Berlusconi, she said, at a show where she was working as a hostess. From then on “a friendship was born, and then a love affair that was over by the end of the year.”

“I want to point out that I felt true love for Silvio Berlusconi,” she added.

Minetti said the trial, known as “Ruby 2” in the Italian press, was based on “ill-concealed moralism”.

“I hope that someone one day can explain to me what I did. The facts in question are considerably distant from what happened,” she said.

On Monday, Silvio Berlusconi’s defence team asked that the ex-prime minister be acquitted on charges of having sex with alleged underage prostitute El-Mahroug and abuse of office.

“Silvio Berlusconi must be acquitted because he has committed no crime,” Berlusconi’s defence lawyer Niccolo Ghedini told the court on Monday.

Berlusconi’s decision to give El-Mahroug money, he said, had been a “humane” gesture and he had believed her to be related to the then Egyptian president Hosni Mubarak and wanted to avoid a diplomatic incident.

The trial, which has already been going on for over two years, is expected to conclude on June 24th.