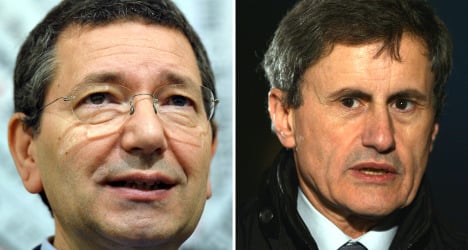 Giulio, a restaurant worker from Calabria who has lived in Rome for many years, wants Ignazio Marino, from the centre-left Democratic Party, to be Rome’s new mayor.

But while he gave him his vote in the first round at the end of May, he didn’t go to the polls time.

“I’m tired of voting as it doesn’t change anything in the end,” Giulio told The Local.

“I voted for Marino before because I think he could be the person to make things more equal.”

He says Italians are ‘lost in politics’ and their tiredness with the system is the reason for another lacklustre turnout at the latest round.

Still, Giulio hopes Marino, who is currently leading the race with 42.60 percent, ahead of incumbent Mayor Gianni Alemanno of Silvio Berlusconi’s People of Freedom party with 30.27 percent, wins the election. He added that he is tired of Alemanno’s ‘superficial’ politics.

Voting started on Sunday in 67 towns and cities and ends at 1pm today, with results expected this evening.

Giovanni Fiorelli, a newspaper stand owner, did go to the polls yesterday. A fervent supporter of the right, he cast his vote for Alemanno, a former neo-fascist.

“He has charisma and has pledged to put things in order,” said Fiorelli.

The scandal-hit former prime minister Berlusconi has been whipping up support for Alemanno in recent weeks through a variety of media channels, including YouTube.

Fiorelli liked Berlusconi when he first came to power, but not anymore.

“At the time I supported him because, like Beppe Grillo (leader of the Five Star Movement party) , he stood for change. But the problem with Grillo’s party is that we don’t have a clear understanding of its policies yet.”

Roberto, a businessman from Rome, also went to the polls early this morning.

He said he voted for Marino, as he “represents the policies I agree with”. He added that if Marino wins, it’s fundamental that he “brings about change; things have to improve for the better.”

For Ornella, who was born in Rome and works in a bank, the city’s environment and public transport network are the issues that need most attention. This is why she voted for Marino. She says the last four years under Alemanno have not been very satisfying.

“Marino is completely different from Alemmano; he is more attentive towards nature. Rome has some beautiful parks but they’re not being properly taken care of.”

She added that the last two years have also been the worst for Rome’s transport network.

“How can you have a city like Rome without good public transport?”

The city’s traffic-clogged streets and waste disposal system have been bones of contention in the election race, with Marino criticizing Alemanno over the issues as well as his failure to address the crisis triggered by Italy’s longest recession. In his defense, Alemanno has said he inherited a badly indebted city hall from a succession of left-wing mayors.

Marcello De Vito, the candidate of the insurgent Five Star Movement, scored just 12 percent in the first round of votes despite the party's success in the parliamentary elections.