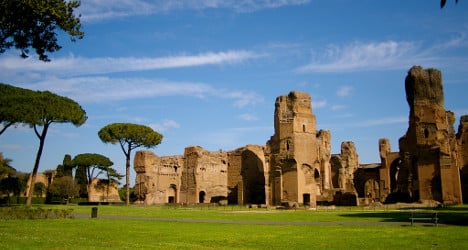 The Baths of Caracalla ruins in Rome where the opera will be staged. Photo: teldridge+keldridge

The 1689 work by English Baroque composer Purcell, which tells the tragic story of the love of Dido, Queen of Carthage, for the Trojan hero Aeneas, will be staged in the open-air, atmospheric setting of the ancient baths, in a part of the ruins which can seat just 200 spectators.

"I have tried to marry the myth created by Virgil around Aenaes, which inspired Purcell, and this magical place," director Chiara Muti told AFP at the final rehearsal, as the witches in the opera danced on stage, casting large shadows onto the towering stone walls.

"It's about mixing different cultures: my production unites the classical world and the English theatre tradition, in a very Shakespearean atmosphere," she said.

In order to illustrate the dark story of betrayal, despair and death, Muti said she chose to use a circular platform to create "a space where things come together and come undone… where objects, feelings are transformed."

Aenaes' bed, the scene of great passion, is transformed into his ship in which he abandons Dido, sparking the opera's famous haunting final lament, "When I am laid in earth."

The costumes aim to "recreate the English court in Purcell's time" and dialogue with "the pictorial vision of English tourists who historically toured Italy."

Italian composer Ennio Morricone – famed for writing the music for several of Sergio Leone's Spaghetti Westerns as well as other Hollywood classics – will also be conducting a concert of his own music in the baths on July 25th.