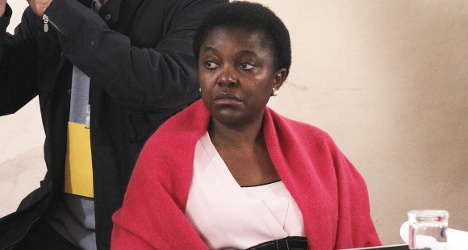 On Thursday Dolores Valandro, a councillor in Padua, Northern Italy, for the far-right anti-immigrant Northern League party called for African-Italian Kyenge, who is the country’s first black minister, to be raped.

"Won't someone rape her, just to make her understand what victims of this terrible crime feel? For shame!" read the comment, which was published on Facebook alongside a photograph of Kyenge.

According to media reports, Valandro had been reacting to an article on a website called “all immigrant crimes” which detailed an alleged attempt by a Somali in Genoa to rape two Romanian girls.

The remarks sparked an immediate outcry, resulting in the councillor’s expulsion from the party.

Valandro, known as “Dolly”, later apologized, saying: “It was something I said in a moment of anger. When I’m angry I vent that way.”

Reaction to the comments has been swift from the Italian government.

“Cecile Kyenge is right, each one of us should feel offended, I feel offended,” Italy’s La Stampa newspaper quotes Prime Minister Enrico Letta as saying.

“The words do not deserve any comment, just disdain. Cecile deserves solidarity from me, the government and the country,” he added.

Laura Boldrini, President of the Chamber of Deputies said: “I’ve known Cecile Kyenge for some time. I’ve shared immigration and asylum battles with her. I’m even closer to her today, after the despicable attack of which the minister is a victim.”

“They [the comments] are even more serious because the person who suggested rape as punishment was a woman that also has a political role.”

“I feel emotional anxiety in the face of the insults made to my colleague Kyenge,” he was quoted as saying.

This is not the first time Kyenge, a former eye doctor originally from the Democratic Republic of Congo (DRC), has been subjected to abuse.

In particular, her support of the legislation to allow children born in Italy to immigrant parents to get automatic citizenship has attracted much criticism from the far-right.

According to AFP, the Northern League member had issued a string of insulting remarks against her, the least insulting of which was that "she looks like a housewife". A petition calling for the MEP to resign was then signed by 130,000 people.