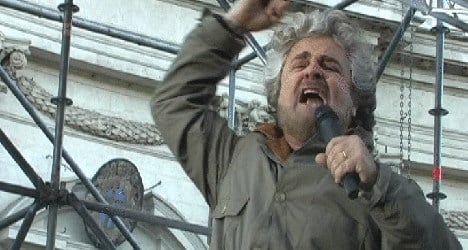 Seventy-nine MPs voted on Monday to expel senator Adele Gambaro, while 42 voted against the measure and nine abstained. The final decision on whether to kick Gambaro out of the M5S will be taken by party members in an online vote.

The MPs vote was called after Gambaro said during a Sky TG24 interview (below, in Italian) that Grillo was the problem with the party. Grillo responded on his blog, saying the statement was “false and damaging”.

Despite the furore, the affair is a result of the party's inexperience and lack of process when it comes to managing internal conflict, Duncan McDonnell, a research fellow at the European University Institute who has studied the party, told The Local.

“They can’t manage the slightest storm in a teacup. If it (the party) can get through its teething problems it might do ok. I wouldn’t start writing an obituary yet,” he said.

The insurgent M5S captured more than 25 percent of the vote in February’s national election, although the party's longevity has been called into question after performing badly in local elections earlier this month.

Still, a recent depiction of the M5S as being on the brink of collapse is misplaced, McDonnell added.

“Local elections have a different electoral system, it’s a personalized system where you vote for a candidate not a movement,” he said. The poor performance is “indicative of a new movement whose candidates are unknown."