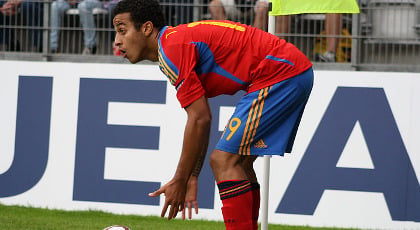 Thiago Alcantara, who was born in Italy, scored a hat-trick for Spain. Photo: henrikalexandersen/Flickr

Barcelona star Thiago, who was born in Italy where his Brazilian father Mazinho was playing for Lecce, doubled his total haul for the side with all

his goals coming in the first-half.

Isco added a fourth in the second-half while Italy's goals came from Ciro Immobile and Liverpool's Fabio Borini as they at least improved on the senior side's 4-0 defeat by Spain in last year's senior Euro final.

Spanish coach Julen Lopetegui would not be drawn on whether the present side were better than the one who won the title in 2011.

"They were different teams, different championships. We were happy two years ago and we are happy now. Not only for the win but for the personality that the team showed."

The 46-year-old added that there were a combination of factors that had made this present side click.

"In the end there are many things: I think it's personality, quality and the behaviour of the group — both those who play and those who don't. They have been an example. It has made us compete very well."

His Italy counterpart Devis Mangia remained proud of his team despite their heavy defeat.

"These guys were great, and they only lack experience. It's not their fault, it's something that will be sorted out with time," said the 39-year-old. "These kids fought till the end looking for a goal."

Spain, who have the upper hand in Under-21 finals with Italy – leading 2-1 after this victory that handed them a fourth title – took less than seven minutes to open the scoring with a nicely worked goal.

Morata, scorer of three goals already in the tournament, got to the byline on the left side of the box and put in the perfect cross as Thiago rose unmarked to head home. However, the Italians drew level three minutes later as a Matteo Bianchetti long ball from inside his own half found Immobile, who controlled the ball beautifully before lifting it over David de Gea.

Morata's extra pace exposed the Italian defence in the 16th minute but his low shot was blocked by the Italian goalkeeper Francesco Bardi.

De Gea too had to be at his most alert when Alessandro Florenzi was found by Borini, but the Manchester United guardian did brilliantly to bat away the Italian's shot.

Both sides traded possession after that until some more woeful Italian defending allowed Thiago to score his second. Italian captain Luca Caldirola was once again the principal offender as he allowed the ball into the box go over him and there was Thiago, who brought the ball down before unleashing his shot which went in between the goalkeeper's legs.

Things got worse for the Italians in the 38th minute as Cristian Tello was brought down by Giulio Donati and Thiago stepped up to slot home the penalty for his first hat-trick for the Under-21 side.

Bardi kept the scoreline respectable for most of the second-half with saves from Thiago and Isco but the rampant Spaniards grabbed a fourth in the 66th minute.

Another rash tackle in the penalty area by Vasco Regini on Martin Montoya saw a penalty awarded and this time Thiago stepped aside to allow Isco to take it, and he put it away with aplomb.

The Italians, though, kept plugging away and Borini scored a cracking goal with 10 minutes remaining, the Liverpool player firing home from just outside the box.