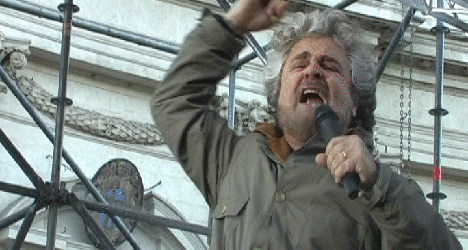 Beppe Grillo called for the senator to go. Photo: Eddypedro/Flickr

Adele Gambaro’s fate was sealed yesterday when an online poll of M5S members showed that 65.8 percent of voters wanted her out of the party. The result followed a vote by MPs on Monday, when 79 M5S politicians voted to expel Gambara. Forty-two voted to save her while nine abstained.

The furore erupted after the senator was interviewed by Sky TG24, during which she said that Grillo was the problem with the party.

The party leader responded via his blog: “Senator Adele Gambaro has made statements that damage the M5S without any coordination with the parliamentary groups. She has damaged the image of the M5S with personal judgements that do not correspond to the truth.”

Grillo has long since had a hostile relationship with the Italian press, choosing instead to court international media and warn fellow party members against being interviewed by national press.

The decision to expel Gambaro comes after the Movement performed badly in the recent local elections, provoking debate about whether the party can succeed in mainstream politics after gaining more than 25 percent of the vote in national elections in February.