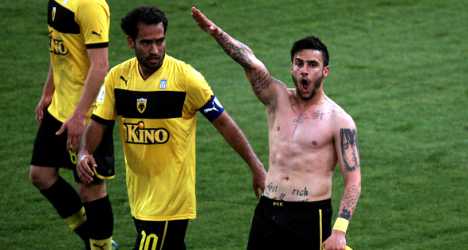 Katidis was banned from playing in the Greek squad after he celebrated a goal with a Nazi salute in March.

The player denied understanding the meaning of the gesture, a line echoed by Novara’s executive vice president, Massimo de Salvo.

“We have seen a guy foolishly unaware of the gesture he made, but now he perfectly understands the significance and the tragedy it represents,” de Salvo said in a statement yesterday.

Lavagno criticised the club for attempting to minimise the controversy surrounding the signing.

“I hope that the league and the FIGC [Italian Football Federation] intervene in this case to prevent any form of tolerance of unjustifiable behaviour,” he said on his blog.

“For some time now we have talked about football not only as a prestigious sport but also for the episodes of racism and vindication of fascism. This is no longer tolerable,” said Lavagno, announcing that he had presented an urgent question to the Minister for Sports Josefa Idem and the Minister of the Interior Angelino Alfano.

Paolo di Canio made the same gesture on the pitch when playing for Rome team Lazio. Sunderland defended its decision although former UK Foreign Minister David Miliband resigned from the club’s board in protest.