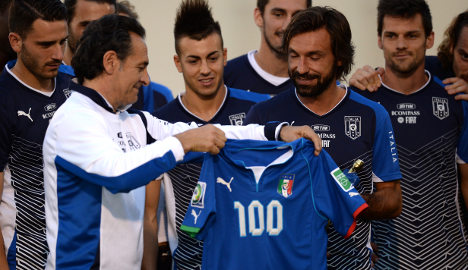 Both sides secured places in the last four with a game to spare, Brazil after a Neymar-inspired 2-0 defeat of Mexico, Italy following a nail-biting 4-3 success against Japan.

With Spain three points clear in Group B, Brazil's superior goal difference means that Italy will probably have to win at the Arena Fonte Nova if they are to avoid Vicente del Bosque's side in the semi-finals.

Although Brazil coach Luiz Felipe Scolari said he would "probably keep the same team" for the Italy encounter, Azzurri coach Cesare Prandelli suggested fitness concerns would force his own hand.

Italy had just two full days to prepare for the Japan fixture, and after an energy-sapping, end-to-end encounter in Recife, Prandelli said his principle concern was allowing his players to recover.

"We're focused on how many players we can get back. The match against Brazil is an important one, and we can't underestimate it," he said.

"The problem is getting some of the physical freshness back. We need to be able to play the next match with the same levels of determination and fitness."

Brazil were made to endure some nervous moments by Mexico before substitute Jo claimed a second goal in injury time at Fortaleza's Estadio Castelao, just as he had in the 3-0 victory over Japan.

The star of the show, however, was once again Neymar, who followed up his blistering half-volley against the Japanese with a fine volley and the assist for Jo against Mexico.

The 21-year-old superstar sought to align himself with the protests sweeping the country by pledging his support for the demonstrators in an Instagram message prior to the game.

His subsequent performance was electrifying, but although he is threatening to sweep the tournament's best goal competition on his own, he says it does not matter how he finds the net against Italy.

"I'm happy I scored two great goals. The match against Italy will be a very tough one though," he told reporters.

"They're a fantastic team, and I hope I can score against them. No matter how if it helps the national team."

Italy and Brazil have contested some of the most iconic games in football history, including Brazil's 4-1 success in the 1970 World Cup final in Mexico and Italy's 3-2 triumph in the second round of the 1982 tournament.

The latter match, in Barcelona, was the last time Italy beat Brazil, who have registered three wins and three draws in the last six fixtures between the sides.

Brazil won 3-0 when the teams met at the same stage of the 2009 Confederations Cup in South Africa, while their last encounter, a friendly in Geneva in March this year, saw Italy come from 2-0 down to claim a 2-2 draw through goals from Daniele De Rossi and Mario Balotelli.

Balotelli already has two goals to his name at the Confederations Cup, but in Thiago Silva, Brazil possess a centre-back schooled for three years in the arts of Italian defending at the striker's current club, AC Milan.

"I know all the Italian players," said the Paris Saint-Germain centre-back.

"I've played with some of them, against others, so I know each of their qualities and what they can do in a match."