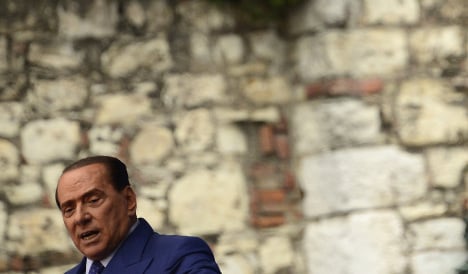 Prosecutors in Milan have called for the 76-year-old magnate to be banned from politics for life and serve six years in prison in a case which could trouble Italy's uneasy grand coalition government.

Berlusconi is accused of paying for sex on several occasions with Moroccan-born Karima El-Mahroug, a then 17-year-old exotic dancer and busty glamour girl nicknamed "Ruby the Heart Stealer".

But in what the prosecution considers a far more serious charge, he is also accused of having called a police station to pressure for El-Mahroug's release from custody when she was arrested for petty theft — an abuse of his prime ministerial office.

His defence claims he believed El-Mahroug was the niece of former Egyptian president Hosni Mubarak and wanted to avoid a diplomatic incident, but prosecutors say it was a bid to conceal their liaison.

They have called for Berlusconi to spend five years in jail for abuse of office, and another year for paying the former pole-dancer for sex after racy "bunga bunga" evenings in a basement room of his home.

Both the billionaire and El-Mahroug deny having sex together but prosecutor Ilda Boccassini insisted in May that Berlusconi "had sex with her and knew she was a minor."

Boccassini said El-Mahroug was the premier's "favourite" and had not admitted their relationship only because she had received as much as $4.5 million ($5.8 million) from the flamboyant tycoon.

El-Mahroug was "part of a prostitution system set up for the personal sexual satisfaction of the defendant," she said.

When the girl was detained on charges of stealing an expensive bracelet, Berlusconi "was forced to intervene and abuse his office" to stop her spilling details of their relationship, Boccassini said.

The Moroccan later changed her testimony, saying she had earlier lied to investigators about the strippers who had "bodily stimulated" Berlusconi and the amount of money she had received from him.

Berlusconi's lawyers called for the charges to be thrown out "because no crime has been committed."

Neither the scandal-hit Berlusconi nor El-Mahroug are expected in court for the verdict on Monday.

The ageing party lover's fate lies in the hands of three female judges.

Whatever the outcome, no sentence will be enforced until the appeals process has been exhausted — a lengthy process which can take years in Italy's famously laboured justice system.

A guilty verdict could create tensions within Prime Minister Enrico Letta's centre-right and left coalition, which relies on the support of Berlusconi's People of Freedom party.

The media baron has vowed not to withdraw support or bow to pressure to leave the political scene.

But he has long blamed his legal woes on persecution by "Communist" judges, and any perceived "victory" on the part of the left could spark an explosive reaction from Berlusconi loyalists.

The former cruise ship singer has been under investigation or on trial ever since entering politics in the 1990s after a career in construction and media.

A Milan court last month upheld his conviction for tax fraud, confirming the punishment of a year in prison and a five-year ban from public office which is frozen pending a second appeal.

Three of Berlusconi's friends — a show-business agent, a former network anchor and a former regional assemblywoman — are on trial on pimping charges in a separate trial linked to the case.

Prosecutors in Naples have also requested a trial against Berlusconi on allegations that he bribed a left-wing senator with three million euros to join his party and topple a past centre-left cabinet.

Even if definitely convicted in any of the trials, Berlusconi is unlikely ever to see the inside of a prison cell because of lenient sentencing guidelines for over-70s.