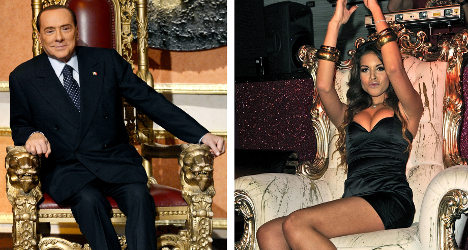 An Italian court on Monday handed down the sentence, with judges going beyond the request of prosecutors, who had called for the 76-year-old billionaire to serve six years.

The sentence is "completely illogical. The judges even went beyond the prosecutors' request," Berlusconi's lawyer Niccolo Ghedini told journalists after the verdict was read out. Berlusconi was not present in court.

A small group of protesters cheered and applauded outside the courtroom, and sang the national anthem.

The sentence will be suspended until all appeals have been exhausted, a process likely to take years.

Berlusconi's age also means he is unlikely to ever see the inside of a prison cell because of lenient sentencing guidelines in Italy for people over the age of 70.

Reacting to the news, James Walston, politics professor at the American University of Rome, described Berlusconi as "fighting for his life".

"It's a big shock to have an ex-prime minister convicted like this and for the courts to up the sentence requested by the prosecution is serious; they really believe the prosecution's case completely," he told The Local.

Berlusconi was accused of paying for sex on several occasions with Moroccan-born Karima El-Mahroug, a then 17-year-old exotic dancer and busty glamour girl nicknamed "Ruby the Heart Stealer".

He was also accused of having called a police station to pressure for El-Mahroug's release from custody when she was arrested for theft.

His defence claimed he believed El-Mahroug was the niece of former Egyptian president Hosni Mubarak and wanted to avoid a diplomatic incident, but prosecutors insisted it was a bid to conceal their liaison.

While abuse of office was the more serious of the charges, it was the sex with the pole dancer after racy "bunga bunga" evenings in a basement room of his mansion that mesmerised the public.

Both the flamboyant billionaire and El-Mahroug denied having had sex.

Prosecutor Ilda Boccassini told the court in her summing up speech last month that El-Mahroug was "part of a prostitution system set up for the personal sexual satisfaction of the defendant".

She said the dancer quickly became the premier's "favourite" and had not admitted the relationship with him only because she had received as much as €4.5 million from him.

El-Mahroug proved an unreliable witness, admitting in May that she had lied to investigators about the parties — going back on an earlier claim that strippers had "bodily stimulated" Berlusconi – and saying she had invented the vast sum of money.

She still admitted to receiving tens of thousands of euros for attending parties and set up a beauty salon.

Walston said the news was not enough to bring the government down entirely, but he expected a strong reaction from his supporters.

"People are prepared to take risks for him, inside and outside of parliament. It will take the very serious mediation of lots of people to keep them calm," he said.