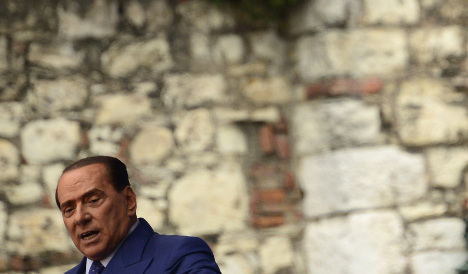 The Italian Treasury raised 3.5 billion euros with zero coupon bonds (CTZs), set to mature in June 2015, at a rate of 2.403 percent, the highest rate since September 2012.

"Further pressure on Italy's bond market will inflame political tensions, with Berlusconi's People of Freedom (PLD) party heaping more pressure on Letta to take a tougher line with Germany and the European Central Bank," he added.

Berlusconi was sentenced to seven years in prison and banned for life from holding public office, and while the punishment is suspended until all appeals have been exhausted, analysts are concerned of the knock-on effect the ruling could have on Prime Minister Enrico Letta's coalition.

"While it's premature to talk about a renewed flare-up of the bond market crisis in the eurozone, funding pressures in Spain and Italy are resurfacing at a time when the two recession-scarred economies can ill-afford higher borrowing costs," Spiro said.

Italy, with the eurozone's third-biggest economy is struggling to pull itself out of a two-year recession and did worse than thought in the first quarter of this year, shrinking by 0.6 percent.