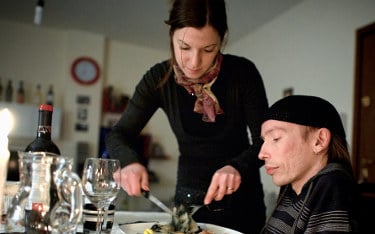 Maximiliano Ulivieri met his wife, Enza, in 2008. Photo by Marika Puicher
Maximiliano Ulivieri is a web designer and social media manager. He was also once a singer in a rock band. He is 43 years old and has been married to Enza since 2008.
His motto is "don’t be afraid to fail". He says he has encountered many failures, but at the same time has managed to achieve several goals in life. All of this comes despite Max suffering from the muscle wasting disorder, muscular dystrophy.
On his website, he describes the disability as his "partner for life". He doesn’t know whether the illness is used to him, or if he is used to it.
Either way, they endure each other, he says.
Max is now working on another challenge: to regulate the profession of a sexual assistant for disabled people in Italy.
Attempting to crack the taboo of disability and sex, particularly in Italy, is a bold move. Few people would be brave enough to try. But Max says he has gathered the support of thousands, including a number of politicians, since the campaign got underway.
He would like Italy to follow in the footsteps of Germany, Switzerland, the Netherlands and Denmark, where the role of sexual assistant has legal status.
“We’re talking about people being properly trained to become a sexual assistant,” he said. “It would be for people who are severely disabled, people who are unable to discover their body or move freely.”
Max doesn't let his disability affect his life. He says he’s been fortunate to meet people who accept him for who he is.
"The strength you have depends on whether you’ve overcome your disability … and the people you meet … you need to try to live your life well."
He has also had a number of girlfriends. He met his wife Enza, who is able-bodied, online in 2008, and they married within months. Before meeting Enza, he lived with another woman. The relationship fell apart naturally.
“Disabled or not, two people need to be able to support each other,” he said.
But other disabled people have not been so lucky.
"Many disabled people live their lives depressed," he added. "There are those who have never had sex, or who have had it only a few times. Maybe they came from an oppressive family too, who might have been scared about them having sexual contact with another person."
Under the legislation Max is proposing, a sexual assistant would be trained to become the sexual partner of a disabled person. They would also be trained as therapists, "to make sure the disabled person doesn't have a psychological problem too", added Max.
The sexual assistant would then be hired for a period of six months.
"It would be enough time to teach the disabled person about their bodies to make them more aware, so that they become stronger and more confident," said Max.
Max has the support of a number of politicians and hopes to see the legislation pushed through, although he understands the process will be long and cumbersome, particularly when it comes to changing peoples' mindsets. Either way, he says disabled people should have the right to choose, just as they do in other European countries.
In Switzerland, sex assistants are paid €100 an hour. Training includes a course on disabilities and psychology as well as practical workshops on massage and masturbation techniques. A similar system is in place in Germany, Denmark and the Netherlands.
It was also a matter of heated debate in France earlier this year, after the National Consultative Ethics Committee rejected the idea, saying it saw too great a risk of abuse.
Still, French MP Jérôme Guedj is attempting to push ahead with the creation of the country’s first sexual assistance service for severely disabled people in his region of Essonne Gernal. He rejected the ethics committee’s suggestions that the services will constitute a form of prostitution and told French newspapers in March that it would be free of charge and run by charities for the disabled using voluntary workers.
The sensitive topic was also raised in the 2012 Hollywood film, The Sessions, which portrays the sexual awakening of a 38-year-old paralyzed man and his relationship with his sex therapist.
In early June, the mother of an Italian man, Giorgio, who suffers from Williams syndrome, a rare mental impairment disorder, called on the role of sexual assistant to be legalized. She said in a video posted on Il Fatto Quotidiano: "In Italy, we still have the notion that a disabled person is not a person. We do not have respect to think that, before their disability, there is a person whose needs must be respected.”
Max is only too familiar with Giorgio's mum's sentiments, but he hopes his campaign will change that.
"If I give attention about the people who want this, then we will get attention. Yes, there are a lot of people against it, but once people understand what we're trying to do, they will support it."