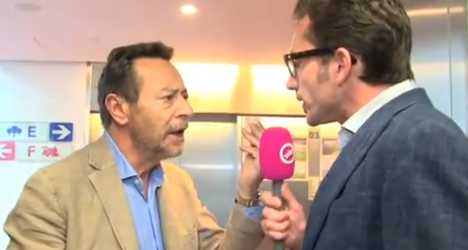 The Dutch journalist quizzed the MEP on his working hours and expenses. Image: YouTube

"You just signed in, it's half past six in the evening; isn't it a bit late to arrive for work?" the journalist asked Baldassarre on arrival at the European Parliament in Brussels.

"You collected €300 for your expenses, but actually you don't have any expenses today," he went on.

Baldassarre brushed the journalist off by saying he didn't understand, firstly in English, before switching to Italian.

The encounter heated up when the journalist, from Dutch website GeenStijl, and his cameraman followed Baldassarre into the lift, at which point the MEP began pushing the journalist.

A scuffle ensued, at which point another Italian intervened and the trio continued shouting at each other in English and Italian.