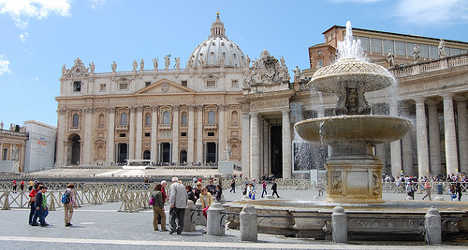 The news was announced on Friday morning. Photo: dslr travel/Flickr

Nunzio Scarano, known as "monsignor" in recognition of his seniority at the Holy See, is accused of fraud and corruption for plotting to illegally fly €20 million in cash into Italy from Switzerland.

The 61-year-old was arrested along with a former member of the secret service and a financial broker after an investigation into the Institute for Works of Religion (IOR) – as the Vatican bank is known – raised suspicions he was involved in money laundering.

Rome prosecutor Nello Rossi said the money belonged to brothers Paolo, Cesare, and Maurizio D'Amico, who own a fleet of oil tankers, and was the "fruit of tax evasion".

Broker Giovanni Carenzio, who is also under investigation in the Canary Islands for fraud according to media reports, was safeguarding the money and was looking for a way to smuggle it into Italy.

Former agent Giovanni Maria Zito was tasked with bringing the cash in on a private jet to avoid tax and customs controls, but the deal fell through when the three men argued, Rossi said.

The jet was supposed to take the €20 million to Rome airport, from where it would be collected and transported to Scarano's house under armed guard, but the plan was aborted.

Mobile telephones used by three were later burned in a bid to destroy evidence, he added.

The arrests were the culmination of a two-year investigation into the three, the Rome prosecutors office said in a statement.

"Other enquires and searches are being carried out…to determine the origin of important sums of money and goods in the possession of Scarano, who holds several accounts with the IOR," it said.

The senior cleric was suspended about a month ago from his position as a member of the administration known as APSA that manages the Vatican's assets, after his superiors learnt about an investigation into his activities, Vatican spokesman Federico Lombardi said.

Lombardi said Vatican authorities would cooperate willingly with the investigation but had not yet received an official request.

Scarano, who had worked for years as a senior accountant for the Administration of the Patrimony of the Apostolic See (APSA), is being held in Rome's Regina Coeli prison.

The plot was uncovered during a separate investigation into Scarano by a Salerno prosecutor for alleged money laundering.

"They called him Monsignor 500…because of the great number of €500 notes he had at his disposition," which he allegedly used to launder money in southern Italy, La Repubblica said.

The probe is part of a much wider enquiry launched in 2011 into the Vatican bank, which has long been tarnished by scandals, with criminals using anonymity or false names to launder money.

The biggest scandal was in 1982 over the bankruptcy of Banco Ambrosia, in which the Vatican was the main shareholder and which had been accused of laundering money for the Sicilian mafia. Banco Ambrosiano chairman Roberto Calvi – dubbed "God's Banker" – was found hanging from Blackfriars Bridge in London in 1982 in a suspected murder by mobsters.

The Vatican promised in 2011 to redouble its efforts to reform the bank and overhaul its financial legislation following reports of anonymous accounts being used by organised crime.

The bank was back in the headlines in 2012, when its head Ettore Gotti Tedeschi was sacked after a major falling out with Vatican Secretary of State Tarcisio Bertone.

In a bid to tighten control of its activities, Pope Francis announced on Wednesday a sweeping study of the bank before a possible clear-out of top management at the Holy See.

In his first real step towards reform, Francis is to take a hands-on approach, ensuring that everything a special commission uncovers will be reported directly to him.

The pope, elected amid an in-house debate over whether a Vatican bank is even necessary, has railed against the cult of money, calling for a "poor Church".

He has also quipped that "St Peter did not have a bank account", and warned bank and other Vatican staff that "offices are necessary but they are necessary only up to a certain point."

The IOR, which does not lend money, manages assets of €7 billion and handles funds for Vatican departments, Catholic charities and congregations as well as priests and nuns living and working around the world.