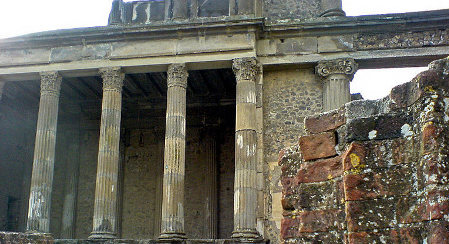 UNESCO has given Italy until December 31st to come up with a suitable restoration plan. Photo: Wikicommons

"Pompeii is a symbol for our country. UNESCO's reprimand is an alarm which I take very seriously and we are already working to overcome the site's urgent problems," Culture Minister Massimo Bray said in a note.

Giovanni Puglisi, head of the UNESCO National Commission in Italy, on Saturday warned the government that it "has until December 31 to adopt suitable measures for Pompeii," before a progress assessment by the organization next February.   In a January report, the United Nations Educational, Scientific and Cultural Organization documented structural shortcomings and light damage at the 44-hectare (110-acre) site in the shadow of Mount Vesuvius, where collapses have sparked international concern.

The giant erupting volcano devastated Pompeii nearly 2,000 years ago in 79 AD but the ash and rock helped preserve many buildings almost in their original state, as well as enveloping the curled-up corpses of victims of the disaster.

The hugely popular site near Naples has come to symbolise decades of mismanagement of many of Italy's cultural treasures, as well as the fallout from austerity cuts in budgets for culture in the recession-hit country.

Puglisi warned of "irregular buildings not included in the previous plan and a lack of personnel" at Pompeii and called for "a new observance zone" around the site to protect it from illegal constructions encroaching upon the area.

The repairs are aimed at reducing the risk of exposure to the elements, reinforcing the ancient Roman buildings, restoring Pompeii's famous frescoes and increasing video surveillance at the site where security is often lax.

"Two of the first five archaeological restoration sites have been opened, the third will open in the coming days," Bray said.

The "Grand Pompeii Project", as it is known, aims to improve facilities for visitors and the European Commission estimates tourist numbers could increase
from around 2.3 million a year to 2.6 million by 2017.