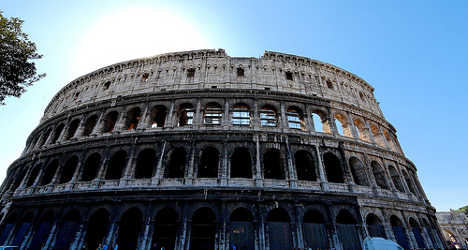 Pieces of stone have began falling off the Colosseum. Photo: Sebastian Bergmann/Flickr

"Over the last five years, the culture budget has been reduced by two thirds," Culture Minister Massimo Bray complained in an interview on Monday published in Italian newspapers.

Italy is now lagging well behind its European counterparts: the country allocates just 1.1 percent of its budget to culture, compared to 7.4 percent in Ireland, 3.3 percent in Spain and 2.5 percent in France.

The lack of funds is having a disastrous affect on the country's archaeological treasures, with many sites closed due to fears of rock collapses and others sporadically shut by protests and strikes.

Giovanni Puglisi, head of the UNESCO National Commission in Italy, warned the government this weekend to act fast to adopt suitable measures for Pompeii, which has long been a sponge for funds then used poorly or syphoned off by criminal organisations.

In a January report, the United Nations Educational, Scientific and Cultural Organization documented structural shortcomings and light damage at the 44-hectare (110-acre) site in the shadow of Mount Vesuvius, where collapsing walls and houses have sparked international concern.

The giant eruption devastated Pompeii nearly 2,000 years ago in 79 AD but the ash and rock helped preserve many buildings almost in their original state, as well as the curled-up corpses of victims.

The hugely popular site near Naples has come to symbolize decades of mismanagement of many of Italy's cultural treasures, as well as the fallout from austerity cuts in the recession-hit country.

Puglisi warned of "irregular buildings not included in the previous plan and a lack of personnel" at Pompeii and called for "a new observance zone" around the site to protect it from illegal construction encroaching upon the area.

Italy, which is relying heavily on tourism to help boost the economy, moved quickly to reassure UNESCO it was doing its utmost to get the repairs made.

"Our highly symbolic monuments are our best calling cards throughout the world," Bray said.

"Pompeii is a symbol for our country. UNESCO's reprimand is an alarm which I take very seriously and we are already working to overcome the site's urgent problems."

Management in 'a comatose state'

As well as problems with upkeep, however, a lack of staff at the sites has sparked trade union strikes.

Tourists eager to visit Rome's Colosseum, Leonardo da Vinci's painting of the Last Supper in Milan or the Uffizi Gallery in Florence last week were met with closed doors.

"We are paying the price of disastrous policies over the last few years," he said.

The number of visitors to the Colosseum, the biggest Roman amphitheatre ever built, has increased from a million to around six million a year over the past decade or so thanks mainly to the 2000 blockbuster film "Gladiator".

But it has also fallen into disrepair in recent years: bits of stone, blackened by pollution, have fallen off and some experts have voiced concern that the foundations are sinking, giving the amphitheatre a lean.

Long-delayed repairs to the 2,000-year-old monument, funded by Italian billionaire Diego Della Valle, are in the pipeline – but problems with red tape mean they have yet to get off the ground.

In the case of Pompeii, Italy is relying on additional funding from the EU. Conservation experts began a €105-million makeover of the site in February – funded to the tune of €41.8 million from the EU – to be completed by 2015.

The repairs are aimed at reducing the risk of exposure to the elements, reinforcing the ancient Roman buildings, restoring Pompeii's famous frescoes and increasing video surveillance at the site where security is often lax.

The "Grand Pompeii Project", as it is known, aims to improve facilities for visitors and the European Commission estimates tourist numbers could increase from around 2.3 million a year to 2.6 million by 2017.