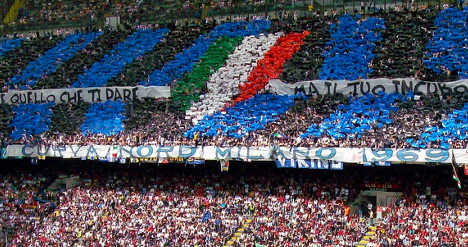 “Sport is never separated from politics, society and culture. In Italy, it’s particularly integrated with those other spheres. If society is corrupt, football will be corrupt,” says John Foot, author of Calcio: A History of Italian Football and a professor at University College London.

Italy once had the most successful championship in the world, but a series of scandals – including the 2006 Calciopoli match-fixing case involving top clubs Juventus, AC Milan, Fiorentina and Lazio – has seen Italian football fall from grace.

But the Italian judiciary has been playing a big part in cleaning up the game, says Foot: “[The] highly-trained judiciary has a lot of power to phone tap and investigate. Italian judges are able to uncover things that perhaps would not be uncovered in other systems.”

Vanda Wilcox, an adjunct professor at John Cabot University in Rome and a football writer, agrees that the authorities are making more effort to root out corruption. But she says they are up against “a whole generation of administrators, who are corrupt and self-serving, attached to their position of wealth and power”.

While Wilcox sees an improvement in financial meddling, she says racism is increasing in football and wider society.

Racist chants aimed at AC Milan striker Mario Balotelli have gained much media attention,  with games being called off or suspended, but this has done little to deter racist fans.

In April, Juventus was charged €30,000 after their fans rolled out an offensive banner and made racist chants during an AC Milan match. The offending club has been battling to clean up its reputation, Wilcox adds.

“Juventus has received most fines in the past couple of years but has done the most at club-level to fight it. They’ve been getting their own star players to send out an anti-racist message and have started initiatives working with fans and the local community,” she says.

Foot argues that racism among football supporters is tied to a broader issue of immigration in Italy. “On the one hand Italy has had an issue with immigration since the 1980s; this has been reflected in places like football stadiums. On the other hand football is worse, because it seems to me that something you can do in a football ground [such a racist chanting] you can’t do in the streets.”

Whereas racism remains rife within stadiums, Wilcox says that violence in football has been on its way out in recent years. “[This is] partly to do with the authorities tackling it, also demographic factors and because violence is shifting to become less visible. It’s been a long time since violence has been inside football grounds.”

In November a group of supports of London club Tottenham were attacked in Rome ahead of a match with Lazio. The attack, in which dozens of fans were injured, had been clearly planned as witnesses described men with their faces covered, armed with baseball bats and knives, launching the assault.

Foot is clear to distinguish between these violent criminals and regular football fans. “There are two broad types of football fans; the families and the Ultras who are organised. The Ultras are the people who will be involved in violence. It’s not random or drunken, it’s controlled organised violence which makes it more scary,” he explains.

While two men were charged over last year’s attack in Rome, Foot says more needs to be done by the authorities to tackle violence. “There’s a general issue of the tolerance of the Ultra groups and that they’re allowed to operate freely.”

Juventus has again been leading the way, Foot says, by building a new stadium which has gone some way towards breaking up the Ultra-controlled sections often found in older stadiums.

Racist attitudes are also changing, Foot says, aided by Balotelli as “a symbol of multicultural Italy”. Balotelli was born in Italy to Ghanaian immigrants and raised by Italian foster parents.

If these issues can be tackled, Italian football may once again be seen in a positive light.

“Their system is not all rotten; there are parts of it which are excellent and are a model for other countries,” says Foot. “Italy has a fantastic technical system, you get extraordinary managers, people who know the game and young people are given excellent training.”

It is this part of Italian football which Foot hopes will restore the country’s reputation ahead of next summer's World Cup in Brazil.

“Football has the power to influence people’s outlook in a good way and a bad way. The manager of the national team is a positive figure and I’m looking forward to seeing the World Cup next year,” he adds.