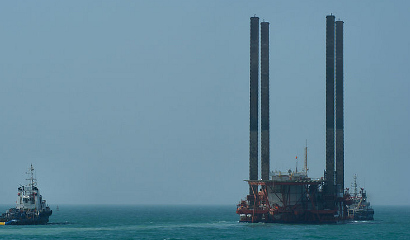 An oil rig owned by Italy's Saipem sunk off the coast of Angola and Democratic Republic of Congo. Photo: Nepenthes/Wikicommons

Saipem said the drilling rig began tilting on Monday and fell on Tuesday in around 40 metres of water after the seabed collapsed under one of its legs. The accident happened near the mouth of the Congo River.

"The emergency procedures were promptly activated last night to ensure the evacuation of the personnel on board," Saipem said in a statement.

Of the 103 staff present, one was reported missing and six incurred minor injuries.

"No environmental impacts have been reported," it said