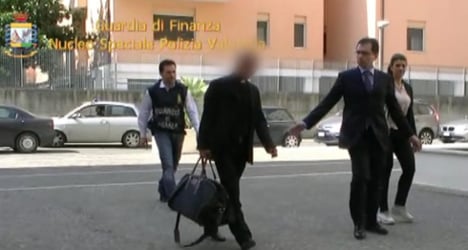 An investigation into the Vatican bank led to the arrest of Nunzio Scarano, a senior Cathoic cleric. Photo: Guardia di Finanza/AFP

The Corriere della Sera daily said that the suspect operations that triggered money laundering controls totalled more than €1 million and were similar to a larger €23 million transfer that led to an investigation that is shaking up the bank.

It also quoted from documents in the investigation against Monsignor Nunzio Scarano, the senior Vatican accountant held as part of a sweeping probe of the scandal-plagued Vatican bank.

Scarano is suspected of allowing his friends to use his own accounts at the bank, formally known as the Institute for Religious Works (IOR).

"He is a real screen in front of the actual economic beneficiary of the operation and he interrupts the traceability of the money," it said.

He apparently had access to various IOR accounts in Italy and abroad, as well as to deposits of the agency that manages the Vatican's assets (APSA) where he worked, the report said, citing police.

Scarano has been arrested on suspicion of trying to transfer €20 million on behalf of the D'Amico brothers, who own a fleet of oil tankers.

His lawyers say Scarano has rejected the charges.

The paper said that inquiry will likely wrap up within days and prosecutors are expected to apply for charges against the bank's then director general Paolo Cipriani and his deputy Massimo Tulli, who both resigned earlier this week.

What has been hailed as a potential revolution by many religious watchers began with the appointment last month of cleric Battista Mario Salvatore Ricca to oversee the IOR's management — effectively placing one of Francis's trusted allies in a key position to report to him.

Last week, the 76-year-old pontiff followed this by installing a special five-member commission tasked with investigating the bank and reporting their findings directly back to him personally.

The commission's first report is expected in October, and may spark wider reforms of the bank.

The IOR, which does not lend money, handles funds for Vatican departments, Catholic charities and congregations as well as priests and nuns living and working around the world.

It manages assets of around €7 billion.

Rene Bruelhart, director of the Vatican's Financial Intelligence Authority, said in May there had been six reports of suspicious financial activity in the Vatican last year and three requests of information from foreign authorities, although he did not give any details.