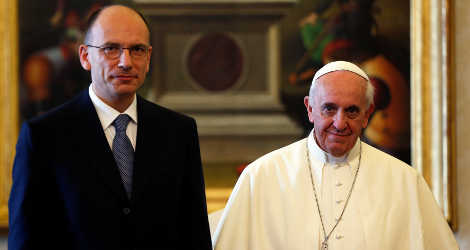 They also discussed the role of the Italian family and the church in securing national stability, the Vatican said in a statement.

Last week Letta secured €1.5 billion to tackle youth unemployment in Italy, which is now above 40 percent, at an EU summit. His coalition cabinet – a compromise between left and right – is seen to be on unstable ground. Yet the Catholic Church is also facing its own challenges, most recently with the arrest of a senior cleric accused of a €20 million smuggling plot.

Developments in the Middle East and the Mediterranean area were also on the agenda, following Letta’s trip to Israel this week.

The discussion also came just days before the Pope will visit the Italian island of Lampedusa, which is currently struggling to cope with an increasing number of migrants arriving by boat.

After the audience with the Pope, Letta also met with Cardinal Tarcisio Bertone, the Vatican’s secretary of state, and the Holy See’s secretary for relations with states, Dominique Mamberti, the Vatican said.