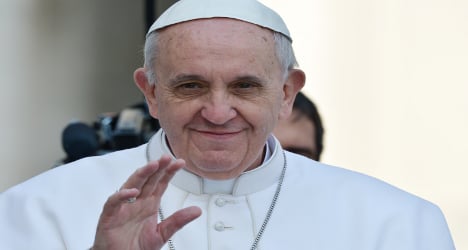 Pope Francis will say mass in honour of the migrants who have died trying to reach Lampedusa. Photo: Gabriel Buoys/AFP

In his first trip outside of Rome since his election in March, Pope Francis will hold a mass of mourning for those who have lost their lives trying to reach Europe.

Just hours before he touched down, 166 migrants arrived in Lampedusa, joining tens of thousands of others who have fled northern Africa in the wake of the Arab Spring revolutions that began in 2011.

Pope Francis boarded a boat to cast a wreath into the sea and met with a group of recent arrivals on the same pier where they first set foot on dry land after long voyages often begun in impoverished and war-torn parts of Africa and the Middle East.

The pope will also celebrate mass with a cross and a chalice made from the wood of rickety fishing boats that migrants typically arrive on, mainly from Libya and Tunisia.

The pope, formerly the archbishop of Buenos Aires Jorge Bergoglio, is himself the son of Italian immigrant parents in Argentina and frequently makes reference to this heritage.

Cardinal Antonio Maria Veglio, head of the Vatican's migrant department, said he hoped the visit would prompt "concrete concern and solidarity to improve situations that have become inhuman and unacceptable".

The pope will also meet with the local population – a fishing community of 6,000 – on an island of 20 square kilometres (eight square miles).

Local mayor Giusi Nicolini said she wanted more help in dealing with migrant arrivals from "the rest of the country and Europe", denouncing the deaths at sea as "a great injustice in the Mediterranean".

One inhabitant has offered his converted Fiat car to be used as a "popemobile" during a trip in which the Vatican has insisted that no politicians should accompany the pope – in a break with usual protocol.

Lampedusa has seen an increase in arrivals in recent weeks because of improved weather conditions, with around 4,000 arriving so far this year – three times more than during the same period in 2012.

But the numbers are still far from the peaks reached in 2011 when tens of thousands arrived in just a few months as maritime border controls disintegrated during the Arab Spring revolts in North Africa.

'Rescuing them is a legal and ethical duty'

Since 1999, more than 200,000 people have arrived on Lampedusa – making it along with the Greece – Turkey border one of biggest gateways for undocumented migrants and refugees into the European Union.

Laura Boldrini, speaker of the Italian parliament and a former UN official on refugee issues, said coordination of rescues at sea "should be improved".

"Laws need to be clearer that they need to be helped. Rescuing them is a legal and ethical duty," she said in an interview with Rai public television.

The United Nations High Commissioner for Refugees estimates that 40 people have died so far in 2013 – most by drowning – trying to cross from north Africa, while around 500 were reported dead or missing in 2012.

The campaign group United Against Racism says its calculations show 17,306 people in total have died trying to enter the European Union since 1993.

UNHCR said the main countries of origin are Eritrea and Somalia, but migrants also arrive from Afghanistan, Egypt, Gambia, Mali, Pakistan and Syria.

People who reach Lampedusa are initially housed in a small refugee centre on the island, which campaigners complain is often overcrowded and unsanitary.

The new arrivals are then taken by ferry to other parts of Italy – either to immigrant detention centres ahead of deportation or to more open refugee centres if they have submitted an asylum request.

Unaccompanied minors are often stranded on the island, however, awaiting appropriate accommodation.

The charity Save the Children last month said that 985 unaccompanied minors had arrived on Lampedusa since the beginning of the year.