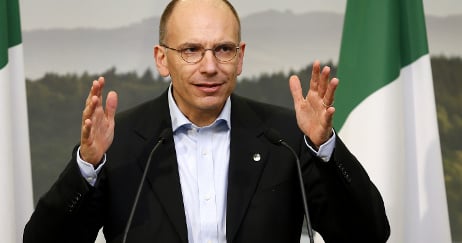 Enrico Letta has called for an inquiry into the deportation case. Photo: Kerim Okten/Pool/AFP

Alma Shalabayeva and her six-year-old daughter Alua were arrested in a midnight raid in Rome at the end of May. Accused of holding a false passport, they were detained before being put on a plane to Kazakhstan.

Shalabayeva is married to Mukhtar Ablyazov, a Kazakh businessman who was granted political asylum in the UK in 2011.

Shalabayeva and her daughter were given the right to remain in the UK but left in fear after London’s Metropolitan Police warned that they could be at risk of attack, Il Fatto Quotidiano reported. The pair moved to Italy, via Latvia, and kept a low profile to avoid being traced by the Kazakh authorities, the newspaper said.

Up to 35 officers raided Shalabayeva's home, while a further 20 or so waited outside, according to statement posted on Facebook by her son. Shalabayeva said they were not in uniform and all carried weapons. She claimed one told her “I am the mafia” while another shouted “Russian bitch!”

Letta has called for an inquiry into how the case was handled. Foreign Minister Emma Bonino was unaware of Shalabayeva’s deportation at the time, according to media reports.

Speaking in parliament on Wednesday, Letta said he would not tolerate any uncertainties regarding the case and said all government agencies would collaborate, La Repubblica reported,

Mario Giarrusso, a politician from the insurgent Five Star Movement party, called for the resignation of the interior minister, Angelino Alfano, due to the poor handling of the case, online newspaper Linkiesta said.

Shalabayeva’s passport has since been proven to be genuine, calling into question the reason behind the arrest and deportation.