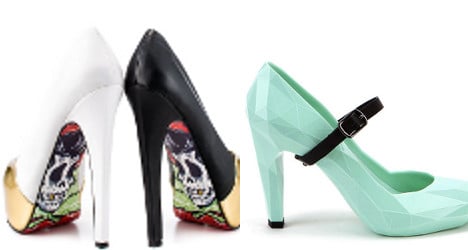 Some of the shoes on loan at Maison de Mavie in Alassio.

Mavie Beccatta, who owns Maison de Mavie, told The Local the move has piqued a lot of interest among regular customers, including television presenter Carolina Bado, since being launched last week.

Beccatta said it allows a woman to feel good without breaking the bank.

“We saw that the economic situation in our country seems to be getting worse, and not everyone can afford to buy new shoes, so we decided to start the rental service," she said.

"We’ll see how successful it is over the summer, and if so we’ll continue with it during winter.”

Meanwhile, an industry report on Wednesday said Italian shoemakers are struggling because of a decline in the domestic market and the difficulties faced by small firms in reaching lucrative export markets.

"The Italian market is not enough any more," Cleto Sagripanti, president of footwear association Assocalzaturifici, said as he presented the report.

The quantity of shoes exported has diminished by 6.2 percent after it had gone up by 15.2 percent in 2010 and by 3.4 percent in 2011. Exports are crucial as sales in the home-market have been diminishing since the beginning of the economic crisis in 2008.

"SMEs (small and medium enterprises) cannot make it on their own, they need help," he said, calling on lawmakers and the government to provide greater export assistance.

Unlike big name fashion houses, smaller companies have difficulty re-orienting their sales network towards more high-growth markets outside Italy. Shoe exports are pivoting towards the East. They went up by 14.7 percent in Russia, 17.1 percent in Japan, 20.4 percent in Hong Kong, 25 percent in South Korea and 40.7 percent in China.

Footwear industry leaders have also urged lawmakers to put pressure on Brussels to make "made in" labelling mandatory for imported goods.

"A lot of Asian enterprises imitate French and Italian brands and cheat consumers making them pay ten times the value of their footwear products," said Sagripanti, who runs a family shoemaking business "Manas" in central Italy.