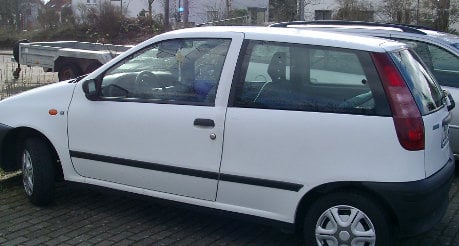 Eustachio Tarasco has lived in his Fiat Punto for the past two years. Photo: Wikicommons

Tarasco lost his job as a contractor on the town's aquaduct in 2004. He had been working on behalf of his local council for 19 years before his contract was scrapped.

He later separated from his wife and became homeless.

Though he spent some time at a shelter run by the Catholic homeless charity, Caritas, last year, the centre closed down. Instead, he has lived for much of the past two years in his white Fiat Punto.

Despite the ordeal, Tarasco told La Gazzetta del Mezzogiorno that he has not “lost his sense of humour, dignity or passion for fishing.”

He keeps a fishing rod, which he would sell if forced to, he added.

Though he sleeps in his car, local residents provide him with food and he washes at his sister’s home.

Still, sleeping rough has had an impact on his health, leaving him with phlebitis, an inflammation of the veins in his legs, and high blood pressure.

“Doctors advise me to sleep well…but in a car, you can’t even stand up.”

The one consolation is that his three sons visit him regularly, he added.

Tarasco, whose mum died last year while his dad is confined to a bed, said that although he receives help from a nearby Red Cross centre, the authorities have so far failed to listen to his plight. He has also sought help from the town's mayor and local politicians, but to no avail.

An estimated 50,000 people in Italy live on the streets, according to figures released last year by the Italian Institute of Statistics. Sixty-two percent became homeless after losing their jobs.