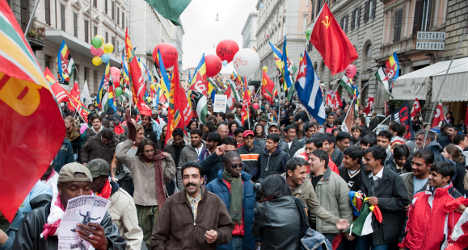 There have been a number of anti-racism protests in Italy. Photo: Vincenzo Pinto/AFP

Racism still appears to be bubbling away in Italy but steps can be taken to stamp out the issue, experts say.

The latest attack by Northern League senator Roberto Calderoli on Kyenge, Italy's integration minister, is just one of many from those in power.

Kyenge has been the victim of several racist attacks, with the far-right Forza Nuova party unfurling a "Kyenge, Go Back to Congo" banner after she took office in April.

In June, Northern League MEP Mario Borghezio was expelled from a European Parliament group for racist comments about the minister.

The perpetuation of racist views by those at the top is damaging progress towards Italy becoming less racist, says Ferruccio Pastore, director of the International and European Forum for Migration Research in Turin.

But he believes that change can happen.

"There is a process of maturation in Italy on this issue, which is being hampered by top-down racist speech. But I think it is always reversible, and the evolution towards a less racist society is possible," he told The Local.

John Foot, a professor of modern Italian history at University College London, says that the fight against racism must come from the people, not the politicians.

“All progress comes from society below, nothing comes from above,” he says. “In everyday life, in the schools and on the streets, immigrants have been present for 20 years. That’s where change comes from.”

But racist attitudes have been deeply ingrained in Italian society. “We all grew up with jokes and cartoons that depicted Africa as a land of naked cannibals dancing around a boiling pot,” says Alessandro Portelli, a professor at LUISS University in Rome.

It is possible to move away from this warped perception of the 'other', but change must come from within the black community, adds Portelli.

“I don’t think much will be done until black Italians are organised as a political force, as happened in the US,” he adds. “I think the fact that Kyenge was appointed to the administration is a sign that there’s an awareness that we’ve become a multicultural nation."

This may become more likely with a change in the immigration law, according to Foot.

"Current immigration laws don't necessarily encourage racism but they prevent immigrants from having rights and expressing their opposition," he says.

If immigration reforms proposed by Kyenge are successful, Foot says "immigrants would become voters and be given a voice".

Italians are already going against the rhetoric of right-wing parties and standing up against racism, with protests taking place in Rome earlier this week.

More than 164,000 people have signed up. “The online petition can help, but the battle for integration is still long,” Passanante says.

The journalist says racist language continues to be used freely by politicians as they “always find a scapegoat”.

Calderoni has not yet resigned, although on Tuesday a lawyer filed a defamation complaint against the deputy speaker.

If convicted, he could face up to four-and-a-half years in prison for his 'orangutan' comment.

The Northern League party did not respond to e-mails or phone calls requesting comment.