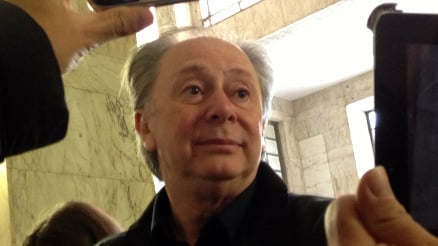 A judge in Milan told the court that the verdict would be announced no earlier than 1430 GMT (4.30pm in Italy) in the trial of failed showbusiness agent Lele Mora, showgirl-turned-politician Nicole Minetti and television host Emilio Fede.

Prosecutors in May requested seven-year prison sentences for the three as well as a life ban on holding political office. They also called for each defendant to pay a €35,000 fine and be banned from working with minors.

Among the girls allegedly recruited by the trio for parties at billionaire Berlusconi's villas was Moroccan-born Karima El-Mahroug, a then 17-year-old exotic dancer nicknamed "Ruby the Heart Stealer".

Berlusconi was sentenced in June to seven years in jail after a court found him guilty of paying for sex with her and abusing his power to hide the liaison – though the punishment is suspended on appeal.

Mora, the only one of the accused in court on Friday, said he had "confidence in the justice system" although he confessed he had "not slept a wink."

According to media reports, Minetti is on holiday in Spain.

His colleague Antonio Sangermano said the three were like "tasters of fine wine" and had obtained financial advantages from Berlusconi because "they know all the secrets" of those nights.

"They carried out a sort of exam of the capacities of the young women and then injected them into the circuit of soirees," Sangermano said. Minetti was also an active participant and "performed sexual acts for money," he said.

All three deny the charges, insisting that while they may have invited girls to the premier's Milan villas, it was to attend nothing more than elegant dinner parties.

MILAN
What are the best Milan neighbourhoods for international residents?
Url copied to clipboard!