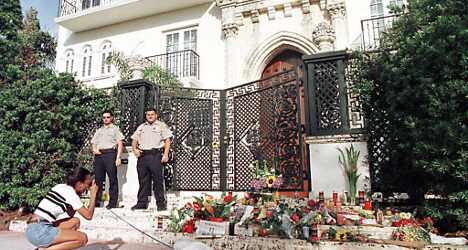 The house and outbuildings which comprise Versace's former home are located just a stone's throw from the beach on Miami's Ocean Drive tourist strip.

The property had been transformed into a boutique hotel but is being sold off by its current owner.

An auction has been scheduled for September 17th. Lamar Fischer, the president of the Fischer Auction Company which is handling the sale, said he expected the estate to be sold within 30 minutes.

Asked how much he expected the property to sell for, Fischer told AFP: "That's the million dollar question, isn't it?

"You never know for sure in these cases but you could say that the real estate value of the property is certainly above $50 million [€38 million], so we expect the price to go higher than that."

Versace, 50, was shot dead on the steps of his home in July 1997 by serial killer Andrew Cunanan.

Cunanan, who had murdered four other people in the months leading to the designer's killing, committed suicide eight days after Versace's murder.