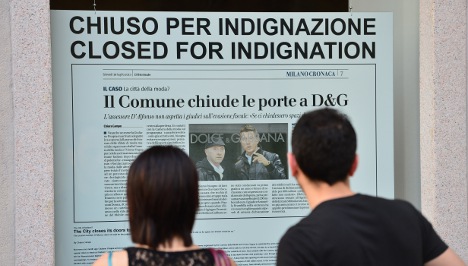 The stores are scheduled to remain closed until Monday in protest by the world-famous designers at their perceived bad treatment from the city following their convictions last month.

The Italian pair were sentenced on June 19th to one year and eight months in prison each and ordered to pay €500,000 compensation to the tax authorities after they were found guilty by the courts of failing to declare some €1 billion in income.

"We are no longer willing to suffer unjustly the charges from the financial police, tax authorities, the attacks of government ministries and the media pillory which we have been subjected to for years now," the fashion pair said in a statement.

"Indignant at the way we are treated by the City of Milan, we decided to close the stores in the city for three days from today (Friday)."

This "is the sign of our indignation," they continued.

The dispute exploded following comments made by a Milan councillor, Franco D'Alfonso, who was quoted in the Corriere della Sera newspaper that Milan should not be symbolised "by famous people and brands convicted of the odious crime of tax evasion".

This prompted a lively debate on Twitter by supporters and critics of the fashion house as well as those trying to protect Milan as a centre of the fashion industry.

The luxury designers added that they were "tired of the constant insults and slanders that deprive us of our peace of mind at work and distract us from our real task of designers".

They added that they had "given a lot to this city, prestige and international visibility, jobs and economic development".

Domenico Dolce and Stefano Gabbana founded their fashion house in the 1980s building it into one of the most recognised brands in the world.