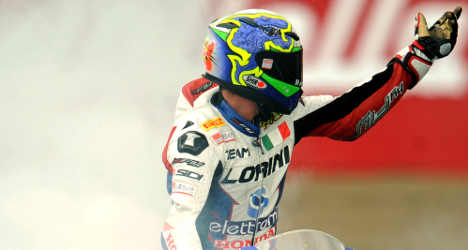 Andrea Antonelli came off his bike and was struck by another Italian racer. Photo: Ben Stansall/AFP

The 25-year-old from the central Umbria region came off his Kawasaki bike on Sunday afternoon, the Championship organizers said.

The race was stopped and despite efforts to save him, Antonelli died around 40 minutes later. The day’s subsequent races were called off.

Posting on Twitter, Zanetti said: “I am devastated and speechless…today we have not lost a racer, but a great person…R.I.P andrea”.

Fellow Go Eleven team-mates released a statement, in which they described Antonelli as a “great racer and a golden boy”. “We will continue in your memory and with your great passion…we will meet in heaven and embrace once again,” the team said.

FMI President Paolo Sesti also responded to the news. “I am deeply saddened about what has happened, and for the loss of a man and a driver so young and full of promise such as Andrea Antonelli,” he said.

Antonelli has competed in a number of international races and in 2010 came fourth in the World STK1000.