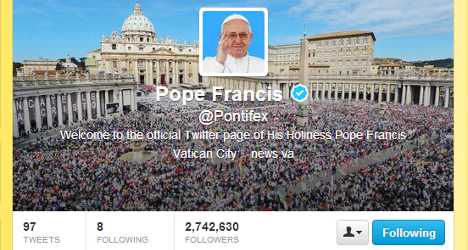 The Pope has more than seven million followers across his nine Twitter accounts, although he trails behind US President Barack Obama’s 33 million, PR firm Burson-Marsteller found.

But the pontiff, who tweets in nine languages, excels in influence, with an average 11,000 retweets on his Spanish account alone, while only around 2,300 people on average retweet President Obama’s messages.

His success comes despite the first papal tweet – under Pope Benedict XVI – not being sent until December 12th last year.

To date, there have been fewer than 100 tweets from the pontiff’s account, yet his relatively infrequent messages have proven to be hugely popular.

The account for the Italian head of state, President Giorgio Napolitano, is comparatively weak.

The Italian-language Quirinale Uff Stampa account launched on August 2nd last year and has less than 34,000 followers to date.

The government did, however, venture into live tweeting at the end of 2012,  when it provided coverage of Napolitano’s New Year message, the study said.

Italian Prime Minister Enrico Letta is more successful on Twitter, having gained over 150,000 followers since launching his account on January 11th last year.