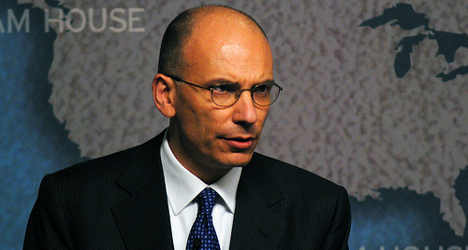 In a speech to Italy's tax agency, Letta said he would "fight relentlessly to recover resources wherever they are, in Switzerland or tax havens," and urged evaders to bring their money back to Italy and pay their dues.

New international agreements to clamp down on tax avoidance – which some say could lead to the biggest change in the global tax system since the 1920s – mean Italians holding capital abroad face a game change, he said.

"The climate is changing," he said, warning tax avoiders that "the international situation no longer ensures the protection enjoyed up to now".

Letta blamed Italy's underground economy – which ranges from simple tax evasion to organised crime and accounts for some 25 percent of the overall economy according to most studies – for damaging competitiveness.

In May, he complained of "incredible hypocrisy on a European level" in the fight against tax fraud, describing it as "a moral imperative, an indispensable aim" in the face of the huge sacrifices citizens are being asked to make in the wake of the economic crisis.

The 46-year-old prime minister is under increasing pressure to kick-start growth in debt-laden Italy under the close watch of the European Union.

On Wednesday, the coalition government overcame internal bickering to present a united front to parliament on measures aimed at cutting red tape and pooling funds into public work projects.

The lower house voted in favour of a bill which would see €3 billion invested in the national rail network and infrastructure projects. The bill must still go before the upper house before it becomes law.

The centre-left and right coalition has been riven with divisions since it came to power in April, and an upcoming final verdict in former prime minister Silvio Berlusconi's trial for tax fraud could destabilise it further.

Ratings agency Standard and Poor's on Wednesday downgraded 18 Italian banks because it felt they were "operating in an environment with higher economic risks, leaving them more exposed to a deeper and longer recession in Italy than we had previously anticipated".

It lowered ratings for banks including UBI and Banca Popolare di Milano, but said ratings for UniCredit and Intesa Sanpaolo remained unchanged.

At the beginning of July, the International Monetary Fund cut its growth forecast for Italy  saying it expected the economy to contract by 1.8 percent this year, from an earlier forecast of 1.5 percent – and called for reforms to tackle high unemployment and the grey economy.

The crack down on tax evaders in Italy began in earnest at the end of 2011, when Prime Minister Mario Monti came to power and the government attempted to reduce the country's deficit and debt.

In 2012, Italy's financial police busted close to 12,000 people for evading over €56 billion worth of taxes and uncovered over 16,000 people working on the black market.