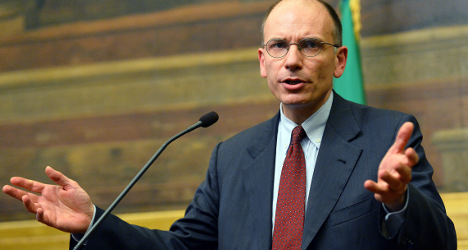 "If Europe is seen to be powerless to resolve Greece's economic crisis, voters will say that Europe does not function and will probably turn to eurosceptic and anti-European parties," Letta said after talks with Greek counterpart Antonis Samaras in Athens.

Elections for the European Parliament will be held in May 2014, during Greece's six-month stint in the rotating European Union presidency.   Italy will assume the presidency afterwards in June 2014, and the two prime ministers on Monday said their crisis-hit countries would work to create a common agenda placing emphasis on growth.

"We have agreed to set common targets for the two presidencies, so that the two six-month terms can potentially become a year of common priorities," said Samaras, who is expected to visit Rome in October for further talks.

In a speech to the Hellenic foundation for European and foreign policy (ELIAMEP), Letta said there was a "big risk" that anti-European parties will hold over 30 percent of the seats in the next European Parliament.

In Greece, there is major disillusionment with the EU, which is deemed to have reacted too slowly to the crisis, and to have placed excessive emphasis on austerity to combat chronic Greek fiscal deficits and a runaway debt.

Unemployment in Greece is at a record-high 27 percent and the economy has been in recession for the past six years, including the previous four years under the fiscal overhaul imposed by EU-IMF loans.

Letta said there had been "faulty timetables and faulty tools" on the part of the EU and the crisis "deepened" as a result.