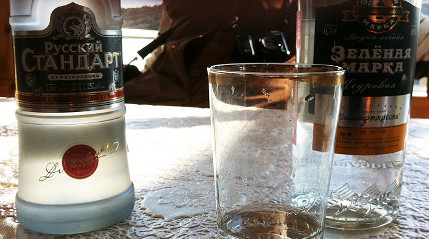 Russian vodka has been banned at nightclubs in Rome and Bologna. Photo: Wikicommons

Russian vodka will no longer be served at Al Cassero in Bologna and Mieli in Rome following Russia’s decision to pass a law against “the propaganda of nontraditional sexual relations”.

Fines of up to €23,000 will be handed out to anyone caught providing information about the gay community to minors, holding gay pride events, speaking in defense of gay rights or equating gay and heterosexual relationships.

The campaign to boycott Russian vodka was launched in America by gay activists and has since spread across gay bars and clubs in major cities including London and Sydney.

The aim is to harm the image of a product that has become Russia’s national brand. Activists have also suggested boycotting the 2014 Winter Olympics, which are due to be held in the Black Sea resort of Sochi.

In a message on Al Cassero club’s Facebook page, staff call on clubbers to “not drink or buy Russian vodka” and to “invite friends and family to avoid any kind of travel to Russia, or even buying anything on Russian websites.”