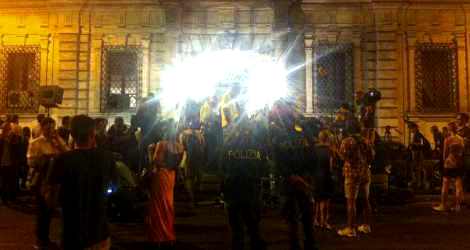 “We’ve been waiting for this moment for 20 years, he’s completely ruined our country,” said 27-year-old Simone.

“I will never forgive him. He destroyed the dreams of an entire generation; our values, our morale – it’s incredible,” he said, adding that the verdict has had a strong emotional impact.

But Roberto, 54, was not convinced the one-year jail sentence would be carried out.

“If he was a normal citizen, it would be a jail sentence. But powerful people never go to jail,” he said.

Given Berlusconi’s age, it is likely the 76-year-old will serve the sentence either under house arrest or through community service.

A heavy police presence, complete with riot vans and barriers, was set up in anticipation of protesters.

But Berlusconi fans were few and far between outside the fortress-like Palazzo Grazioli.

The Local, did however, come across one supporter, who asked to remain anonymous. She said that the high court judges were purely out to get the political leader.

“They convicted him because he’s Berlusconi,” she added, a line often uttered by the People of Freedom leader himself.

“There are millions of us supporting Berlusconi. He’s unique. Forza Berlusconi!”

An air of uncertainty hung in the hot August air as Italians will have to wait for a Senate vote to see if Berlusconi’s political immunity will be listed.

“I hope for some justice, but we don’t have it yet,” said 54-year-old Serena. “They’ve asked for a prison sentence, but I’m not sure if it will happen.”

Tensions in Rome have been raised further by the political impact of the verdict, which threatens to send shockwaves through the fragile coalition government.

“I think it’s a fair sentence and the judges applied the law in the proper way, but the problem is with the consequences,” said 24-year-old Matteo.

“I support the PD [Democratic Party] so I am happy with this sentence against Berlusconi. But the government needs stability for reforms, and now we don’t know what will happen.”